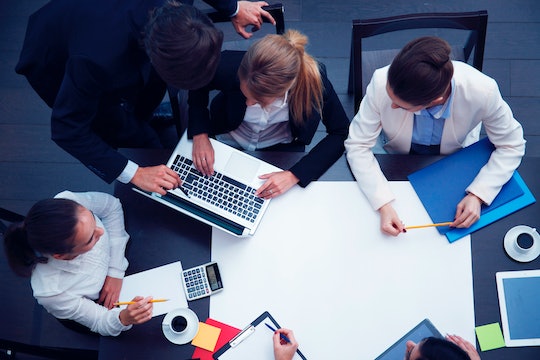 Humor is often the best way to approach a difficult subject. After all, sometimes you just have to laugh to avoid crying or screaming. With that in mind, Equal Pay Day memes and funny pics can distill the serious topic into a retweetable jab.

Originating as a public awareness campaign from the National Committee on Pay Equity, Equal Pay Day recognizes how far into a current year women have to work in order to earn what their male counterparts made the previous year. In other words, a woman would have to work until from January 1, 2016 to April 4, 2017 to earn the same wages a man made in the whole of 2016. Whereas most holidays celebrate a past achievement, Equal Pay Day exists to highlight a disparity that continues to affect women the world over.

The gender wage gap is, to be sure, a complicated issue. According to the American Association of University Women (AAUW), American women who worked full-time jobs were paid 20 percent less than men in 2015. The 20 percent figure is generally well known, but many other factors can affect it. As further noted by the AAUW, other variables such as age, race, education, industry, and location play into the pay gap as well. It's a nuanced issue that stirs up discussion and controversy alike.

As with any issue concerning economics, gender, and notions of fairness, the responses to Equal Pay Day have been somewhat mixed. But thankfully, even something as serious as the gender wage gap also brings in its share of jokesters. Hopefully, these funny memes and pictures about Equal Pay Day will help lighten the mood about this touchy subject.