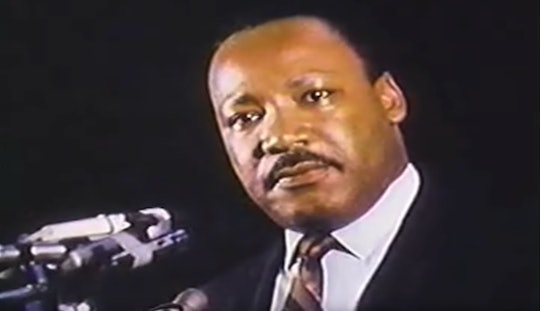 11 Fascinating Facts About Martin Luther King Jr., That Will Surprise & Impress You

On the 50th anniversary of his assassination, Martin Luther King, Jr. remains a highly regarded American hero. Even if you're already familiar with the renowned leader of the American civil rights movement, there are a few interesting facts about MLK that you might not know. The man led a fascinating life.

Born in Atlanta in 1929, Martin Luther King, Jr. became a leader in the movement to achieve legal equality for African Americans in the '50s and '60s. King's approach to nonviolent movements, which reflected the peaceful teachings of Mahatma Gandhi as well as his own Christian faith, meant relying on the power of speeches and acts of nonviolent protest, according to The King Center. King's famous "I Have A Dream" speech, as well as his "Letter from a Birmingham Jail," remain some of the most powerful and important meditations in American history. Until the moment of his assassination in 1968, King worked tirelessly for the rights of African Americans.

With all of his great achievements in mind, it's easy to overlook some of the facts that round out King's life story. But as the following notes reveal, King was also a devoted student, tireless speechmaker, and big-time fan of a certain '60s sci-fi show.

More Like This
20 Smart Bathroom Products For Small Spaces
Late-Summer Gardening Tips For Beginners
No Sex Drive? Here's Why & What Might Help
These Trio Costume Ideas Prove That The Best Things Come In Threes