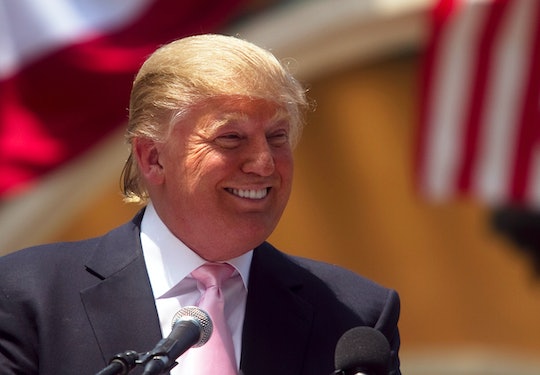 Donald Trump has been a good punchline since, well, forever. The hair, the voice, the ridiculous one-liners. It can be pretty hard to take him seriously, unless you’re the man himself, who apparently takes himself way seriously. But no matter how you feel about him being our next prez, I’m willing to bet you see the obvious humor in all of his antics. And luckily, so does the Internet. There are tons of hilarious Donald Trump memes  floating around the web these days — and trust me, each one will get your fired up for the GOP debates tonight.

While it might be true that the best way to defeat a bully is to ignore them, a little sense of humor can go a long way. There are so many Internet toys to make fun of Trump. Listening to politicians talk about their outrageous views, say weird things about minorities, and just straight up lie can make a woman lose her head. So take a deep breath and laugh. In fact, according to the Mayo Clinic laughter “actually induces physical changes in your body.” Laughter is good for you. In the short term, it might prevent you from throwing things at your television during tonight’s debate if you don’t agree with something Trump says. In the long term, doctors say it just improves your overall mood and health. Which means that in a very roundabout way, Donald Trump might be good for you. Let’s just focus on what’s important — getting through a three hour debate where Trump will be allowed to voice his opinions.

Here are some of our favorite memes circling around to help you get through it.