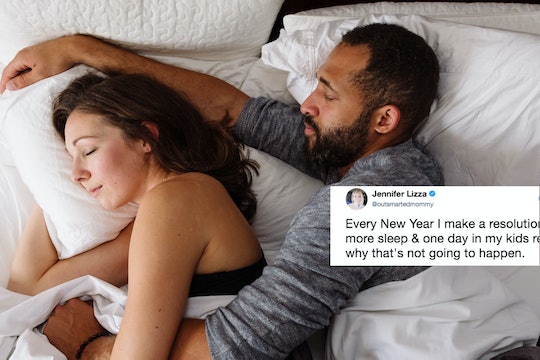 11 Hilarious New Year's Resolutions From Parents That At Least Tried

More Like This
Restaurant Tips From Parents Of Picky Eaters, Because They Get It
Parents Are Vaccinated, But Still Nervous About Their Kids Getting The Shot
22 Things Desperate Parents Let Their Kids Destroy For Some Dang Peace
Where To Travel With Your Kids This Summer

Whether your resolutions focus on your role as a parent or spouse, or are straight up selfish hopes that prioritize your own self-care, here are some of the funniest resolutions for parents that have been shared in the Twitter-verse — that makes them official, right? Maybe you have vague intentions to prepare dinners that don't involve the microwave and/or include the words "nugget" or "tots." Maybe you've promised to actually scrub the gunk off the shower tiles on a regular basis. Maybe you just want to be a better parent overall. Whatever it is, the truth is that we too often abandon our resolutions before Christmas break is even over. (Then again, what are we even doing to ourselves trying to make resolutions when the kids are on vacation from school?!)

The parents behind these tweets have a much more realistic take on the whole resolution racket. Because let's be honest, any resolution that you make can be perceived as one big prank you play on yourself — what are the chances you'll actually keep any of them? Will we get more sleep this year? Yeah, probably not. Eat healthier? Sure, occasionally! Go to the gym regularly? Um...

At least one resolution we can keep is to laugh more often. Here are some delightfully defeated tweets from parents to get you started.