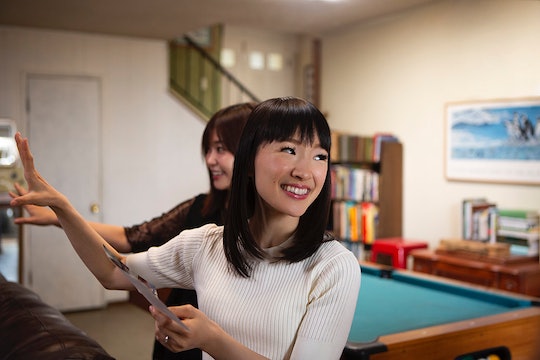 There are two kinds of people in the world: ruthless decluterrers and those who can't seem to part with their empty shampoo bottles, for instance. If you fall into the first category, then you probably loved Netflix's new series, Tidying Up with Marie Kondo. And if you identify with the latter category here, then this show was likely a literal horror movie. No matter what camp you fall in, most people can probably find humor in these 11 hilarious tweets about Marie Kondo's show.

Kondo is the author of the popular book, The Life Changing Magic of Tidying Up. "Japanese cleaning consultant Marie Kondo takes tidying to a whole new level, promising that if you properly simplify and organize your home once, you’ll never have to do it again," the book's synopsis on Amazon reads. "Most methods advocate a room-by-room or little-by-little approach, which doom you to pick away at your piles of stuff forever. The KonMari Method, with its revolutionary category-by-category system, leads to lasting results."

The success of Life Changing Magic of Tidying Up led Kondo to land her very own Netflix show. Premiering on Jan. 1, the series has since inspired a lot of conversations and jokes on Twitter. From spoofing Kondo's advice to throw out things that don't give you "joy" to a hilarious pop culture reference about Taylor Swift's scarf (it will make sense when you get there), here are 15 funny tweets about Marie Kondo's show.

Everyone Thinks They're The Next Marie Kondo

"My wife watches Tidying Up with Marie Kondo once:

Parents, This One Is For You

"Marie Kondo holding my screaming newborn over the bin: but do they bring you joy?" one tired parent wrote.

No One Is Feeling Joyful, Apparently

The Best "Thank U, Next" Parody EVER

Someone get this woman a song writing job, stat.

This Is Your Year, Thrifters

"Me waiting for the thrift stores to fill up with all the good stuff now bc of this Marie Kondo Netflix special," an ingenious person wrote.

The Best Pop Culture Reference Ever

"Marie kondo telling jake gyllenhaal to throw away taylor's scarf from that very first week but he can't get rid of it... cause he remembers it all too well," someone joked.

An Erika Girardi (Real Housewives of Beverly Hills for those who don't know) meme sums up Netflix's genius perfectly.

"Accidentally watched 'Tidying Up With Marie Kondo' on Netflix," a viewer wrote. "Now I find myself tidying every draw and saying thank you to my underpants."

Your Closet Is Ron Swanson Ignoring A Civilian RN

Who can resist a Parks and Recreation GIF?

Does Marie Kondo Do Email?

"Does Marie Kondo do email accounts," someone asked in the most relatable tweet of all time.

Yep, I think it's safe to say all of these tweets give me "joy."