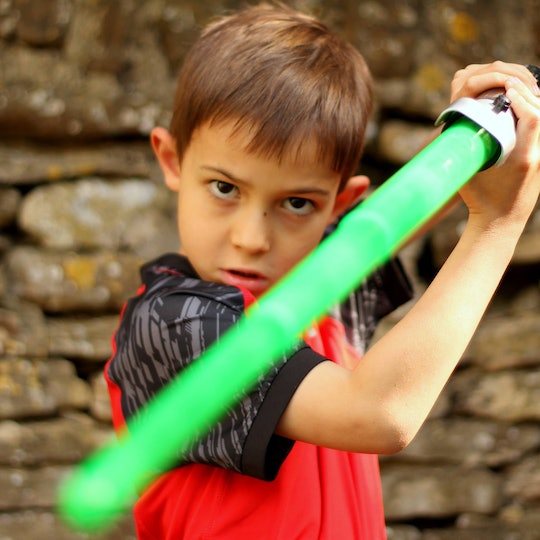 11 Kids On How Much Princess Leia Meant To Them

As an 80s baby, my introduction to Star Wars was a right of passage. It's one of the memories with my dad I treasure most, and the first time we watched Episode IV together I'm not actually sure who loved it more. I was captivated by the story, and he was excited to share it with me.

I lost my dad when I was 9, but when I became a mother with two daughters of my own, I got the chance to share a part of the grandfather they'd never known. And I got to feel the joy my dad felt with me as they whooped it up when the princess in the movie came to the rescue. They'd grown up with Ariel, Cinderella and Sleeping Beauty, but my bra caught fire the first time I introduced them to Princess Leia Organa.

I knew how I felt about Princess Leia as a kid, but I didn't know if they'd have the same appreciation. They're living in a time when women are shattering glass ceilings left and right, whereas I was told in 6th grade that "girls just aren't good at math." I wondered if Leia would be such a radical character for my girls.

After the first episode, my 7-year-old asked for Leia buns. She was hooked, and she begged to enroll in the Jedi Training Academy on our trip to Disney World that summer. One afternoon I peeked in her room to find her trying to move her stuffed cat across the bed using The Force. I came in and asked what she was doing and she said, "Mom, I think I'm a Jedi." I stifled my chuckles as we talked serious shop about the films, and I'll never forget hearing my daughter say, "I just love Princess Leia because she doesn't just sit there and wait for some boy to come rescue her. She just grabs a gun and has her own ideas."

Carrie Fisher portrayed one of the greatest heroines of the silver screen, and there's no doubt Star Wars fans around the world felt a great disturbance in The Force with her passing. Carrie was not Leia, but Leia would not have been the same without Carrie. Leia choked out her oppressor with the very chains he tried to bind her with, and Fisher basically told people to shove it up their a** when questioned about her weight while reprising her role as General Organa.

I know what her character meant to my generation, but I wondered if those sentiments were still the same for the new generation of Star Wars fans. We asked moms to ask their kids what Princess Leia meant to them, and here's what they had to say.

More Like This
Fun Ways To Celebrate National School Nurse Day
From Captions To Gifts, These Are All The Kindergarten Graduation Ideas You Need
34 Instagram Captions Perfect For Preschool Graduation Photos
Princess Diana Gave Prince William A Cute Nickname That's Stuck With Him For Years