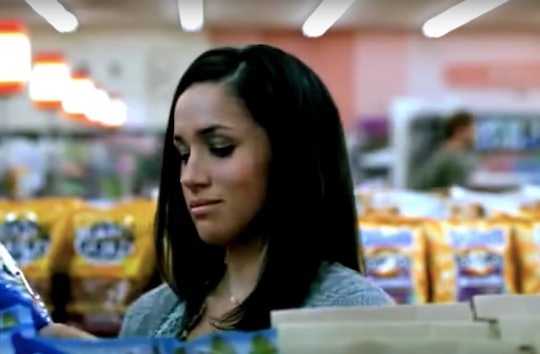 With her wedding to Prince Harry in 2018, Meghan Markle became one of the most popular women on Earth. The media has followed her every step, fans have gushed over her grace and poise, and the whole world melted at the news that she will soon be a first-time mom. But Markle had quite a life before she met Prince Harry, too. In fact, here’s a look at a few Meghan Markle throwback moments from before she met her prince that you may not remember.

Markle grew up in Los Angeles with her mother Doria Ragland and father Thomas Markle, Sr. until her parents divorced when she was 6 years old, according to ELLE. Her early life was spent on film studio lots where her father was a lighting director, according to Esquire. After school she would head to the set of Married… With Children, and wait until her father was finished with work. Occasionally, her dad would send her off to check on what craft services was doing when the humor got to blue for her young ears, the publication detailed.

Markle's mother continued to work as a social worker and yoga instructor and young Meghan split her time between her parents’ homes, as Good Housekeeping reported.

Indeed Markle's humble upbringing will likely look a lot different than her royal baby-to-be's, but these impressive moments from her past seem to indicate that she'll make sure her child is grounded and stays true to themselves.

She Protested A Sexist Ad... And Won

Markle was 11 years old when she heard an Ivory dish soap ad talking about “Women all over America,” using the product, according to Good Housekeeping. The young activist found the phrasing sexist and wrote to the company, as well as powerful women like Hillary Clinton and Gloria Allred.

Procter & Gamble, which created Ivory, soon changed the ad to say “People all over America,” according to Business Insider, and Markle’s career in activism was born.

Before actors get their first break a lot of them work odd jobs, but Markle’s was actually pretty cool. As a calligrapher, she lettered invitations and holiday cards for celebrities including Paula Patton and Robin Thicke, and the company Dolce & Gabbana, according to Esquire. In February 2018, she told the magazine that she’s glad to have been a small part of keeping the art of the handwritten note alive.

She Was A Suitcase Girl On Deal Or No Deal

Everyone has early jobs they’re not wild about, and for Markle that was a stint as a suitcase girl on Deal Or No Deal. In the same interview, she told Esquire that it was valuable experience as it taught her exactly what she didn’t want to be doing in life. Prior to that, she noted, she’d been working in the U.S. Embassy in Argentina so yes, according to Marie Claire, definitely a big life change in that transition.

Before Markle became a star on Suits, she showed up in a commercial for Tostitos in 2009, according to Inside Edition. The commercial is pretty bland, but Markle was as great an actress as she always is, trying to find the just the right snack.

She Used To Live In Canada

According to Business Insider, while Markle filmed Suits she spent eight months of the year in Toronto, so she rented out a three-bedroom home with a private backyard in the Seaton Village area of the city. She also drove an Audi SUV most of the time while living up north, but in 2017 she opted to give up the lease and relied on a chauffeur to get to set, according to Business Insider.

A Moment In Malta

Between work and her partnership with the U.N., Markle has traveled all around the world. But one of the trips that meant a great deal to her was a getaway to Malta, where her great-great-grandmother used to live, according to Cosmopolitan. She posted the photos from the trip on her now-defunct lifestyle blog The Tig, including one of her in a traditional Maltese headdress in which, of course, she looked beautiful.

Though Markle wanted to be an actress, she hated the cliché of a Los Angeles girl who tries to make it in the biz, according to Good Housekeeping. To defray any criticism, she decided to legitimately study acting at Northwestern University in Illinois, according to the university's website. But not content with just one degree, she double-majored in international relations, which had to eventually come in handy as she settled into the life of a royal. While in college she got her first role on General Hospital, according to Us Weekly.

She Was Homecoming Queen

Her very first tiara! Markle was crowned homecoming queen at Immaculate Heart High School in Los Angeles, according to Us Weekly. One of her teachers later told CNN that when she heard about the royal engagement, she had immediately thought of how lucky Prince Harry is.

Maria Pollia told CNN: “I know Meghan. And I know that she is someone who is a very unique individual who has the depth, and the intelligence and the focus, but also the joy to be a wonderful companion for him and for them to be companions to each other in what is probably a very stressful way of life."

She Loves To Hang Out With Girlfriends

Markle’s friendship with Serena Williams is legendary and the two met at a flag football tournament for DirecTV’s Celebrity Beach Bowl in 2014, according to E! News.

On her lifestyle blog, The Tig, Markle wrote about the pairing, according to E! News, saying: “We hit it off immediately, taking pictures, laughing through the flag football game we were both playing in, and chatting not about tennis or acting, but about all the good old-fashioned girly stuff. So began our friendship."

She Appeared In A Commercial For UN Women

In the run-up to the royal wedding, the world was scouring the web for old footage of Markle. One of the things that came up was a commercial from 2015 which she appeared in for a United Nation’s Women campaign, according to ELLE UK. The effort was part of an initiative that asked women to nominated a female leader they knew, and mimicked a speech that Markle had given recently as a UN Women’s ambassador.

She’s Been A Designer

Anyone who's had to wear a ton of dresses for events has probably had a hankering to fix a thing or two here or there. Markle got that chance in 2016 thanks to clothier Reitmans, who released the Meghan Markle x Retimans dress capsule collection. Give the unconventional star just a little time in England and she could have her very own, very proper line of regally appropriate garments, too. You never know.

It's easy to see that Markle definitely had a fulfilling, rich life long before she met her love Prince Harry. But fans of the couple are equally happy for her current role in this fairy-tale come true.