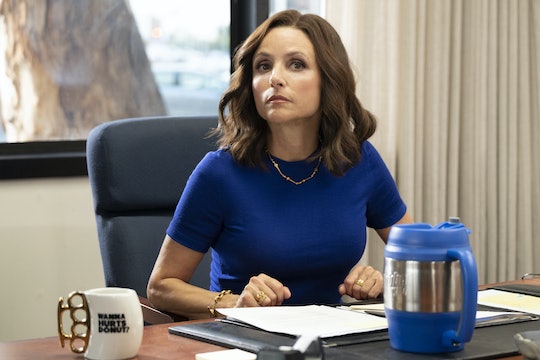 These 'Veep' Memes Will Help Get You Through The Final Season

After seven seasons of the most skillfully crafted insults known to premium cable, HBO's Veep is sadly coming to an end this year. Julia Louis-Dreyfus has won a Best Actress in a Comedy Emmy for her work on every single season so far, and it's raked in a stunning number of accolades for everything from acting, to writing, to directing. Of course, the best memes from Veep a shining example of what happens when outstanding writing, directing, and acting collide, and, with all those elements at the top of their game, the series has resulted in some of the internet's most iconic gifs.

The show is best known for its biting and profane insults, and there are countless listicles devoted to rounding them all up. But few things capture the show better than gifs of Selina having absolutely had it with the yokels on her staff, or Sue's calm and reasonable boundaries, or Jonah, Mike, or Gary's withering responses to getting owned by Dan, Amy, or Ben. Truly, there's a Selina reaction gif for every mood, especially if that mood is "narcissistic," "annoyed," or "enraged." The Veep gang is every deranged-with-ambition, yet deeply self-loathing millennial's collective mascot and they'll be missed once they're gone. Luckily, these relatable memes will live forever.