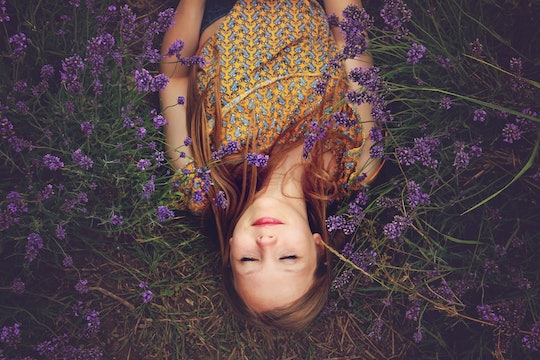 11 Old Wives' Tales About Anxiety That Are True

Some old-school beliefs deserve to stay in the past. Taking snake oil in place of medication, for instance, is probably not the greatest idea of all. With that said, plenty of folk wisdom has held up to the rigors of scientific study. In fact, the old wives' tales about anxiety that are actually true just might make your great-aunt say, "I told you so."

Many typical treatments for anxiety, from lavender to chamomile tea, have been shown to have a legitimate soothing effect in persons with anxiety. Even the simplest of ideas, such as taking a walk or soaking in the tub, have also been shown to induce a state of calm. Sometimes the foremothers really did know best.

In this case, anxiety cures may be more wanted than ever before. According to the Anxiety and Depression Association of America, an estimated 40 million adults in the United States cope with an anxiety disorder. In many cases, therapy and medication are the most direct route to wellness. Basically, I'm not suggesting that anyone should throw out a Prozac prescription in favor of some bottles of essential oils, but these old-school remedies may help individuals with mild to moderate or serve anxiety as a supplement to your regime of therapy and medication. A warm bath, nap, or walk in a sunny space will help calm most nerves, but these remedies help too: