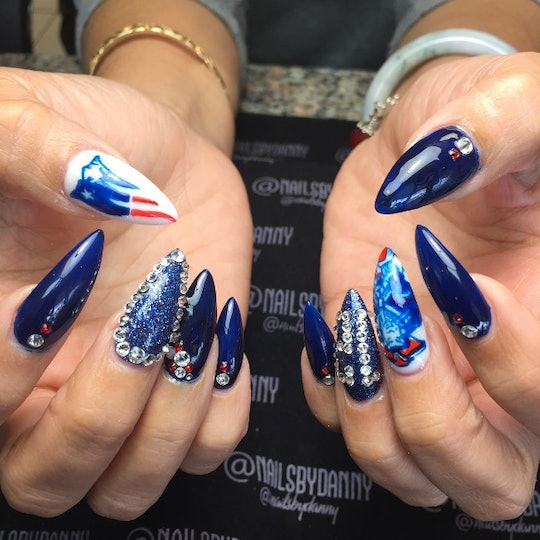 11 Patriots-Themed Nails For The Super Bowl

Super Bowl Sunday is almost here, and if you're a fan of the Patriots, you're probably over the moon with excitement about their inclusion. Though many people feel as if football is a sport that men love to watch, plenty of ladies go hard for their teams, too — especially when Super Bowl Weekend comes around. So, if you're a Patriots fan and can't wait to rep your team during the Super Bowl, having some Patriots-themed manicures to compliment your red, white, and blue attire will be a great idea.

There's really nothing like seeing your team make it into the Super Bowl after a long, hard fight during the season to get there. So because of that, it's only right that you go all out to show your support for their efforts. It doesn't matter if you choose to watch the game at home, head out to Houston to watch it in person, or nab a seat at the nearest bar, having some Patriots-themed manicure ideas to get beforehand will have you showing up in in style.

Ready to turn a few heads while you're out there showing your Patriot pride? Take a look at these 11 ideas to give yourself a little inspiration.