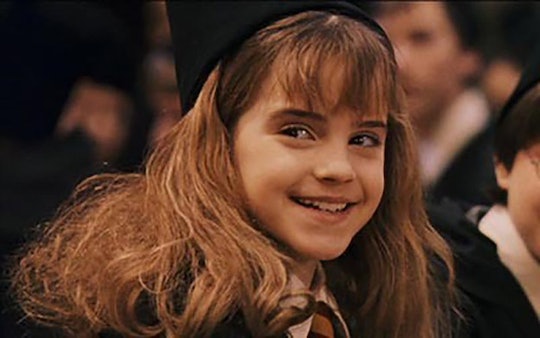 11 Signs Your Kid Is The Hermione Of Her School

Hermione Granger was first introduced to fans of the Harry Potter series as an over-achieving smarty-pants who quick to correct her classmates' mistakes and show off her skills. As a muggle-born witch, Hermione felt as though she had something to prove to her peers in the wizarding community who'd grown up knowing about magic their entire lives. But, most likely, this is just Hermione's personality. We've all encountered kids who are, as Snape would say, "insufferable know-it-alls." Now that you're a parent you might want to look out for signs your kid is the Hermione of her school.

Hermione's know-it-all attitude softened throughout the years she was at Hogwarts. Eventually, as she matured, she began academically competing against herself rather than trying to prove something to those around her. Her intelligence became an asset to her friends, especially Harry who probably wouldn't have made it past his first year without Hermione at his side.

She was a bit of a late bloomer, as most hyper-intelligent kids tend to be. But by the time she was in her seventh, and final year at Hogwarts, she had become the smart, brave, strong and beautiful heroine that has been an inspiration to so many young readers.

Having a kid who's the Hermione of her school sounds like the kind of goals we all should have. Here's how to tell if you have a mini-Hermione on hand.