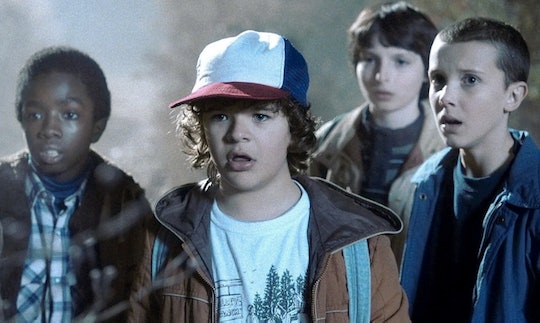 What do you get when you mix a sci-fi thriller, 1980s nostalgia, alternate dimensions, and kids with the most charisma since Harry Potter and his gang? You guessed it. Stranger Things was the breakout show of the summer, and no one is ready to forget about Eleven and the dopest boys in Hawkins, Indiana anytime soon. Unsurprisingly, Stranger Things Halloween costumes for toddlers are the most in demand this season, because, well, the kids rock. Also, kids on an illicit, renegade adventure with supernatural elements is the stuff Halloween is made of.

If you're a parent who knows what's up, you'll also know that dressing your toddler as part of the Stranger Things entourage will end up being a total blast. Gathering a bunch of friends and family to recreate the characters in this mega hit will ensure you're not only the coolest parents in the neighborhood, but also that you're having the most fun. Also, you know you want to celebrate the return of Winona Ryder's career by dressing as mamma of the year, Joyce Byers, so break out the Christmas lights early, get yourself a mullet wig and call it a day.

Plus, unlike Joyce's quest to find her son, these costumes do not require a ton of work, so aside from being on fleek, Stranger Things costumes for toddlers are also pretty simple DIY Halloween costume ideas.

More Like This
Ginger Zee Had A Perfect Response After A Troll Asked Her "Who's Raising Your Kids?"
It's A Beautiful Day In Jenny Slate’s Neighborhood
Megan Fox Explains Why She Asked Machine Gun Kelly If He Was Breastfed As A Baby
Sarah Levy Reveals Birth Of Her Baby Boy & His Name Is A Sweet Tribute To Her Dad