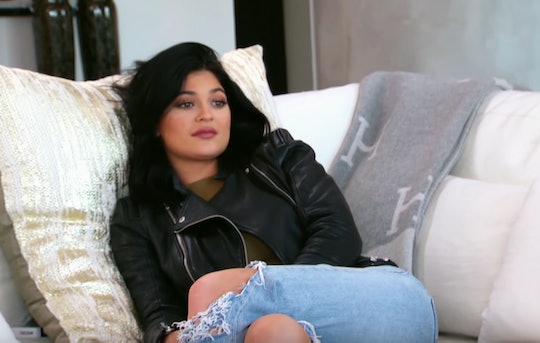 Whether or not Kylie Jenner is pregnant is one major secret that only Jenner and the rest of her family members have been keeping close to themselves. For months, fans have been waiting to see if Jenner or anyone else close to her would spill the beans — no such luck. But while people don't know about her pregnancy, they do know plenty of other facts about her. While there is still a lot to know about the star, these 11 surprising facts about Kylie Jenner can easily tide you over and fill you with knowledge until the big pregnancy reveal, if it ever happens.

Fans who are obsessed with the 20-year-old Kylie are obsessed to say the least. People can't get enough of her makeup line, Kylie Cosmetics, her social media accounts, and her appearances on her television shows, Keeping Up With The Kardashians and Life Of Kylie. But recently, after the pregnancy rumors were made public, Kylie has retreated out of the public eye. Because she has been so silent and out of the public, it's hard for anyone to keep up with Kylie, currently.

But thankfully, Kylie has lived 20 very exciting years of life to make up for her absence. These facts might even surprise you.

1. She Was A Cheerleader

Kylie was a cheerleader in high school, according to BuzzFeed, and cheered alongside her sister, Kendall Jenner, at Sierra Canyon School in Chatsworth, California, according to the Daily Mail. Unfortunately, her cheer career was cut short after she left high school to be homeschooled her senior year. Kylie received her high school diploma in 2015, according to Vanity Fair.

2. She Doesn't Want To Be Famous

As previously stated, Kylie's retreat out of the public eye has come as a shock to a lot of people — especially since people saw her grow up in front of TV cameras and in the public eye. But Kylie has been outspoken about not wanting to be famous. Kylie said during a 2017 episode of Life of Kylie, according to People:

In another episode of Life of Kylie, according to People, Kylie stated that fame stressed her out and she just wanted to "run away." Kylie didn't choose to be famous, so these thoughts are completely valid.

By growing up in front of the public eye, one would expect Kylie to be comfortable in front of other people (including the millions who watch her on TV), but that simply isn't the case. Kylie hates public speaking, according to BuzzFeed, and once revealed in a YouTube video that she was so nervous during a school presentation that she said, "My favorite food is soccer and basketball."

Sure, Kylie is the cosmetics queen. But it takes a lot of practice and time to look like Kylie. Kylie has said that her daily makeup routine is comprised of 22 steps, according to People, and in 2015 told Teen Vogue that her routine takes her two hours. Kylie said in the interview, according to People:

I never really wear makeup, unless I need to, because when I do my makeup I really like to do my makeup. So I'm never just going to spend 20 minutes, you know? A good night is, like, two and a half hours of full makeup, curling hair, whatever.

Kylie reportedly hates chocolate cake, according to Seventeen, but does love chocolate. Who knew?

Most people wouldn't know that Kylie has quite a large scar on her thigh. During a 2011 question and answer session with fans, Kylie revealed how she got her scar. Kylie said, according to Entertainment Tonight:

When I was about 5 my sister [Kendall] and I were playing hide and seek and I hid inside this really tall, enclosed gate. After a while, when my sister didn't find me I had to climb up this sharp pole sticking out from under the gate. I slipped and the pole went into my leg. I tried pulling away to get the pole out but it just tore through my whole leg. It's smaller now though because I grew.

7. She Stalks Her Exes On Social Media, Too

Even Kylie isn't immune to being curious and stalking her exes on social media. In a 2015 interview with Teen Vogue, Kylie revealed that she doesn't obsess over people or other celebrities, unless they are romantically involved. But on the other hand, her exes aren't off limits, either. "Sometimes I stalk my exes," Kylie said, according to the Daily Mail.

Everyone has been there, Kylie. Don't worry.

8. Family Is Everything To Her

During that same Teen Vogue interview, Kylie told the magazine that having so many powerful women around her (ahem, her sisters) is a blessing. Kylie said, according to Just Jared:

Having sisters is the best. I have a different relationship with each of them. I go to Kim for fashion advice, Khloé is always boy and family advice, and Kourtney is like another mother to me. It's so fun being an aunt. When I look far into the future and decide to have kids, I need to have a million girls.

9. She Isn't A Binge-Watcher

While binge-watching Netflix might be everyone else's vice of choice, it isn't something that Kylie enjoys partaking in. Kylie told Glamour UK in 2016 that she has never finished watching a TV series "in her life," according to Fox News.

10. She Was Bullied In High School

No one is immune to being bullied, not even Kylie. In a 2015 appearance on The Ellen Show, Kylie told host Ellen DeGeneres that she had been bullied in her past:

I have been bullied my whole life, whether it was by my peers, or comments on Instagram and Twitter, whatever. And I never talked about my story, really. I realize that I've kind of accepted it, and that just comes with the territory.

While this shouldn't come as a huge surprise, makeup plays a huge role in Kylie's life — so much so that if it wouldn't be for reality TV, makeup would be her whole life. Kylie always has makeup on her — she told Look magazine that she "always has chapstick" on her and "a thousand lip liners," according to Fox News. And told Complex in 2016 that makeup would be her go to career, if she had a choice. Kylie stated:

It's Kylie Jenner's world, and everyone else is just living in it.