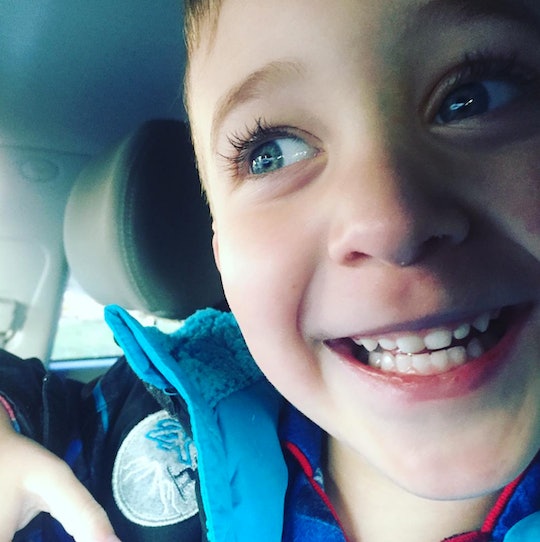 When I delivered my son five years after my daughter, I experienced a wide range of emotions. Having suffered miscarriages before him, I wasn't sure if I should celebrate or let guilt consume me because he'd made it and they hadn't. This made him my "rainbow baby." It's still rather complicated to explain why he's here and two babies I lost aren't, but I've come to realize I'm not meant to know those answers. Instead, I'm supposed to know the things my rainbow baby taught me about myself in his first year of life that I'd forgotten. Things that maybe I didn't even know where bubbling beneath the surface, but he did.

Being a rainbow baby means that my son was delivered after a pregnancy or infant loss and, let me tell you, he lives up to the title. His very essence resembles all the colors of the rainbow, bright and hopeful. He doesn't realize all the ways he's breathed new life into me, or why I'm so attached, but someday he will. After my first miscarriage, I was broken. That loss, which was so unexpected and so disappointing, forced me to come to terms with my own mortality. I started to questioned why some mothers endure losses while others don't. After almost two years (and another miscarriage as my partner and I continued to try to conceive), I was officially defeated. I believed having another baby wasn't meant to be and learned to appear grateful and fulfilled by the child I did have. Internally, though, I wasn't ready to accept that new "normal."

Then, a magical (and extremely difficult) pregnancy happened out of nowhere. It wasn't expected or planned, or any part of my mindset after I endured the previous losses, but there it was. My dream had come true. That baby survived and became my rainbow baby and all-around amazing boy. I'd lost so much before, but as I held him for the first time I was reminded of all the things I'd forgotten about myself. Through the first year of his life, and beyond, he's continued to show me who I really am, filling all the spaces that had been emptied for so long. Here's who I am, and what I represent, through my son's eyes.

More Like This
Celebrate Baby's First Christmas With These 40 Instagram Captions
Can You Give A Sleeping Baby A Breathing Treatment? Experts Explain
20 Stocking Stuffers For Kids Under $20
7 Surprising Old Wives' Tales About Christmas Eve Babies