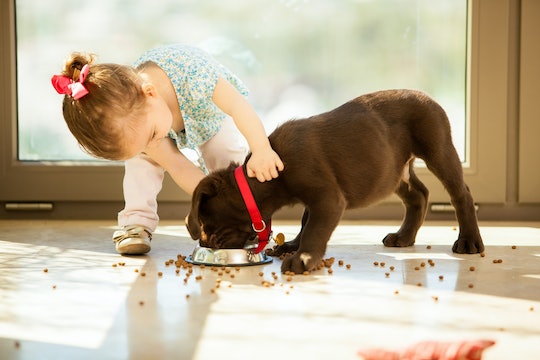 11 Times When Babies And Pets Are Exactly The Same

Sometimes, friends of mine who are dog owners but who don't have kids will notice something about their pets' behavior, or the level of involvement and investment they require, that reminds them of the responsibilities of parenthood. Because they're good people, they'll always go to great lengths to assure everyone else that they do not believe owning a pet is the same thing as raising a child, because of course it's not. Still, while parents definitely feel more strongly for their children than their pets, and while the complexity of human society makes parenthood difficult in ways pet ownership could never be, I must admit that there are times when babies and pets are exactly the same.

I used to joke to myself that my incredibly social, occasionally needy cat felt more like a human toddler at times; a thought I didn't dare speak aloud before having kids of my own. If I were working at home, she'd do everything she could to get my attention, including making mischief all around me. She'd whine at me until I played with her. Now that I do have a toddler who does basically the same thing, I'm willing to admit that I was not that far off about her. I also find myself giving the same exasperated instructions to my cat and son at least twice a week. (They know they're not supposed to get on the counter. It's all just dishes waiting to be washed up here anyway. If they're going to get up here, they could at least help wash and dry, you know?)

So yes, while there is no direct comparison of our actual feelings for our babies versus our feelings for our pets, they're all treasured members of our families. They also definitely have some things in common, like:

More Like This
These Darling Baby Boy Names All Start With The Letter "D"
Here’s What You Need To Know About That Viral 1960s Baby Formula “Recipe”
Ashley Graham On The “Fun, Organized Chaos” Of Raising Twins
These Stepmother's Day Instagram Captions Are Straight From The Heart