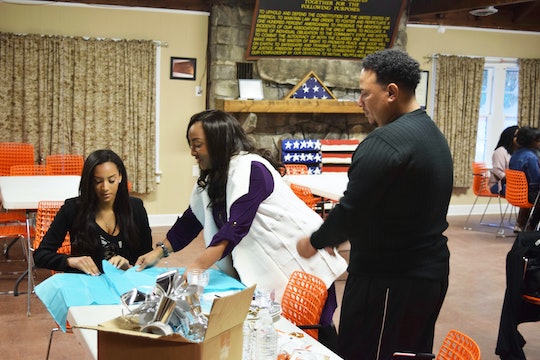 Chantel's Family Is Amping Up The Drama On ‘90 Day Fiance: Happily Ever After?'

Ever since their explosive debut on Season 4 of 90 Day Fiancé, Chantel Everett and Pedro Jimeno have been one of the most talked about couples of the series. For those watching their post-marriage journey on 90 Day Fiancé: Happily Ever After?, it seems like Chantel and her fam might be the ones driving the chaos. These tweets about Chantel’s family on 90 Day Fiancé prove that fans are hip to their drama.

During Season 4 of 90 Day Fiancé, Chantel and Pedro revealed that they met online when Chantel was looking for someone to teach her Spanish. She soon went to visit Pedro in his home country of the Dominican Republic, where they fell in love. After Pedro proposed marriage, Chantel returned to the U.S. and was able to bring Pedro on a K-1 fiancé visa. When Chantel introduced Pedro to her family, she told them he was visiting on a student visa, hiding the fact that they were engaged and in the process of getting married.

But eventually, the two came clean, and got married with their family in attendance. However, Chantel’s family never really seemed to like Pedro, and at one point, Chantel’s brother, River got into a heated exchange with Pedro that turned into a physical fight. Now, on the new season of 90 Day Fiancé: Happily Ever After?, fans are seeing Chantel’s family at the center of the drama once again.

In the latest episode, Pedro, knowing how much Chantel’s family hates him, refuses to go to their house for Thanksgiving dinner. Some viewers didn’t blame Pedro for skipping out on this family get together.

Chantel gets pretty angry with her husband, but upon arriving at her parents house, her family adds more fuel to the fire. They accuSome fans think that Chantel’s family is trying to break up her marriage, which is why they continuously demean Pedro in front of her.

Pedro may not be completely innocent, after all, he has chosen to take his family's side over Chantel in the past. But many people think that Chantel’s family is being just a little extra. At Thanksgiving dinner, Chantel's dad accused Pedro of being on drugs, and Chantel’s mom pulled out a taser that she named “Shocky," insinuating that she could use it against Pedro if needed.

Some viewers were quick to catch the fact that Chantel’s mom took out the time to name her taser, and couldn’t help but mention how funny (and weird) it was.

Other viewers just can’t get over how Chantel’s siblings, being grown adults, still call their parents “mommy” and “daddy” like young children.

But at the end of the day, most 90 Day Fiancé fans are just hoping that Chantel and Pedro can get away from the family drama, and make their marriage work. They do love each other, and I think people just want to see their love prevail.

New episodes of 90 Day Fiancé: Happily Ever After? air Sundays at 8 p.m ET on TLC.