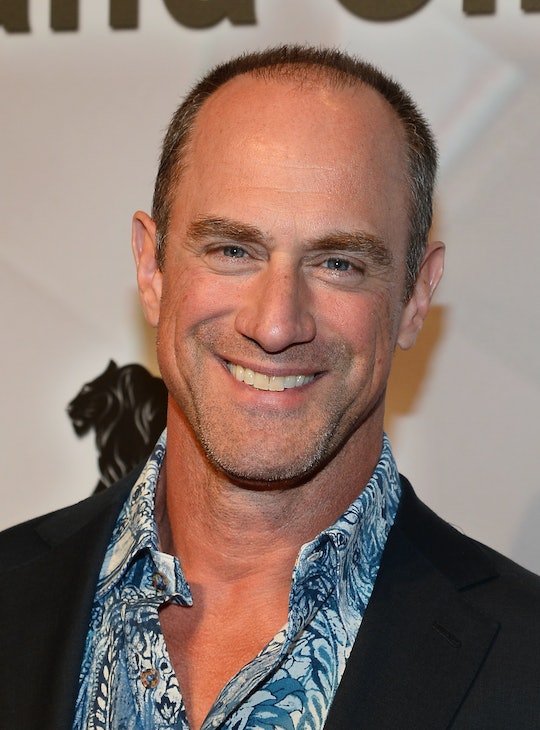 Twitter Couldn't Get Enough Of Christopher Meloni On 'The Handmaid's Tale'

After watching Christopher Meloni take down sexual predators for years on Law & Order: SVU, fans were thrilled to see him return to TV on The Handmaid’s Tale. He joins the cast as Commander George Winslow, and with his very first appearance on the show, he managed to send the internet into a tizzy. If you want to know what all the buzz is about, check out these hilarious tweets about Christopher Meloni on The Handmaid's Tale.

On SVU, Meloni played Detective Elliot Stabler, a cop that helped bring rapists and molesters to justice. But his role on The Handmaid’s Tale is pretty much the polar opposite. On this series, he plays a powerful Gilead High Commander, who lives with his wife, Olivia (Elizabeth Reaser) and six kids.

In the latest episode, “Household,” Serena (Yvonne Strahovski) and Fred (Joseph Fiennes) Waterford bring June (Elisabeth Moss) to Washington D.C., where they plan to create propaganda videos in an effort to get baby Nichole back from Canada. Commander Winslow and his wife invite the Waterfords and June to stay in their home for the duration of their trip.

Just seeing Meloni back on screen was enough to get fans talking:

Some, including Hulu, made callbacks to Law & Order’s iconic “dun dun” sound:

At first glance, Commander Winslow just seemed like a strong, confident politician, who was a great dad and devoted husband, but upon realizing how many children he had, viewers realized that he must have done some pretty terrible things — including raping and kidnapping — to get the life he has. Noting the stark contrast from his character on SVU, fans took to Twitter to share the irony.

But as the episode rolled on, fans quickly realized how complex and layered Meloni’s character is going to get. In one scene, when the two commanders are alone playing pool, Commander Winslow seems to make some sexual advances towards Fred. At one point, while telling Fred that his idea to create the videos were a “stroke of genius,” Winslow bends over the pool table to strike a ball, and seems to intentionally stretch his rear towards Fred’s lap.

The internet is already in love with Meloni’s butt, as you can see in this Buzzfeed video, but this The Handmaid’s Tale scene just made people talk about it some more.

Towards the end of the billiard’s scene, Winslow rubs Fred’s shoulder, hinting that he might want more than just a professional relationship with him in the future. After picking up on the sexual tension, some fans came up with the funniest memes:

Fans will likely see much more of Meloni this season, and if he continues to deliver jaw-dropping moments like he did in the last episode, you can count on seeing more Twitter buzz about him.