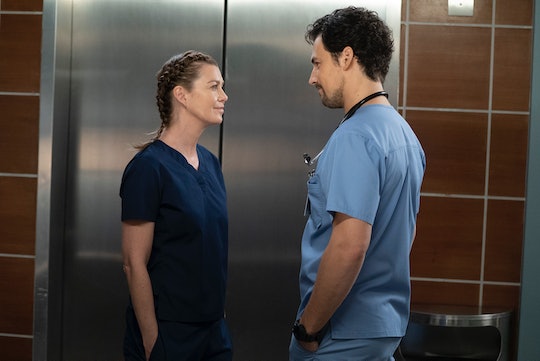 'Grey's Anatomy' Is Returning & It's Showing No Signs Of Slowing Down

The day is finally upon us — after what felt like an excruciatingly long break (but was actually just two months), Meredith and co. are back on TV to finish out Season 15 of Grey’s Anatomy. As is often the case on the long-running medical drama, audiences were left with a major cliffhanger, as several docs were trapped in elevators after a massive windstorm sent a power line crashing. Ahead of Episode 9, tweets about Grey’s Anatomy returning have flooded the show’s hashtag, proving that you’re all still in love with the Grey Sloan Memorial gang.

Even aside from the show’s return, a lot has been going on. You’ll recall that Sandra Oh, the one-and-only Cristina Yang, sadly left the series (and her person) a few years back. This month, the Killing Eve star hosted a prominent award show alongside Andy Samberg — oh, and she also won the award for Best Actress in a Television Series Drama, which resulted in an adorable Cristina and Owen reunion at the Golden Globes when her co-star and series love interest Kevin McKidd congratulated her in person. Understandably, many fans were over the moon (unless you’re an Amelia-Owen shipper which, like, OK, but respect the history).

But getting back to the real matter at hand: the return of the series. With an extra three episodes recently added on, upping the order for Grey’s Anatomy Season 15 to 25 total episodes, there’s a lot more to come this season. And let’s be real for a second: most of that excitement is about the hot new ship that is MerLuca. (That’s Meredith Grey and resident Andrew DeLuca, for those not up on the lingo.) There are differing opinions out there on whether or not the two should give things a go, but one thing’s for sure: they’re stuck in an elevator together, so something is about to happen.

Come on, guys. This is Grey’s Anatomy. This pair of hot doctors are going to get down to business. And what happens in an elevator usually doesn’t stay in an elevator…

But not everyone is a fan of the pairing. Sorry, MerDer is long done. It’s time for Meredith to move on.

Of course, just because your ship isn’t trapped and trying to figure out where they stand doesn’t mean they won’t have a moment in the upcoming episodes. Everyone, and I do mean everyone, is pulling for Bailey and Ben to finally patch things up. How can they not? They’re perfect. And they’ve gone through enough.

All of the characters have been through a lot. It’s undeniable — after this long, they’ve basically experienced every kind of trauma there is. And while things are always tense on-screen, it’s all celebration behind-the-scenes: The series is about to break a major record and become the longest-running medical drama in TV history.

Let’s all give it up for Shonda Rhimes! And it looks like the show’s ratings are holding strong, proving this show really could last forever.

Aw Ellen, I love you. Even when Grey’s looks like it’s going to lose its spark and your faves are dropping like flies (*sniff sniff* I miss Calzona so much), it keeps reeling you back in.

Guys — this dog is even obsessed. I feel justified.

This drama can do no wrong...

...Because when the world is hard to take, at least you always know you have Grey’s to fall back on.