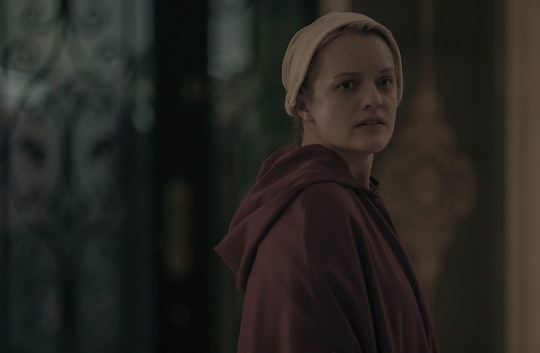 Everyone Remembers What You Did To June, Serena Joy

June has spent Season 3 of The Handmaid's Tale attempting to take down Gilead from the inside, which meant making some uncomfortable alliances. She needed people with power to work with her. Since she already had a relationship with the Waterfords, she decided to try to get Serena and Fred on her side. But these 11 tweets about June and Serena on The Handmaid's Tale indicate that audiences are more than a little conflicted about that relationship.

Serena has put June through hell. She abused her, screamed at her, attacked her physically, manipulated her. In addition to taking part in the ritualized rape referred to as "the Ceremony" every month, she planned for June to be raped to induce labor — but really, to punish her. Serena was also integral in the creation of Gilead. But once she started to suffer under the new regime too (fancy that, Serena Joy!), she started to have doubts about everything. June is taking advantage of that in an effort to gain allies. But some viewers are finding it difficult to get on board with Serena the cigarette-smoking revolutionary.

At the end of "God Bless the Child," June and Serena sat side by side smoking, a visual representation of both their rebellion and their new partnership. But is it possible to accept Serena switching sides after everything she's done? Responses are mixed, to say the least.