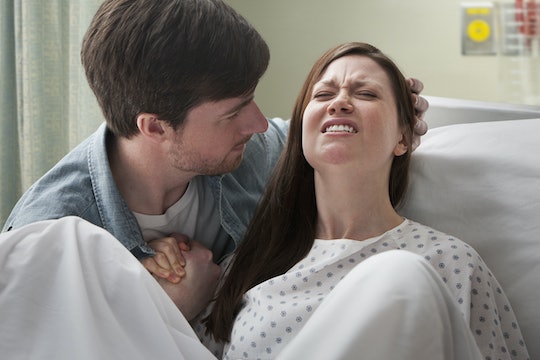 11 Ways Dads Can & Should Help When You Give Birth

There are so few things that you actually have control over when it comes to the process of giving birth. Even when you do have the best strategy in place, the universe can throw you a curveball. For instance, I had my entire birth plan figured out down to the tiniest detail, but then I ended up having to get a C-section. So with all the stress involved during labor, it's such a weight off your shoulders to have your partner there. There are plenty of ways dads can and should help when you give birth. After all, you didn't exactly make that baby by yourself, right?

In films and television shows, there are loads of stereotypes about how dads behave during their wife's pregnancy and they appear almost entirely clueless once they're in the delivery room. Yet I've found that those tropes, though great for comedy, don't actually hold up in the real world. My best friend gave birth to her second daughter prematurely and I can tell you I’ve never seen a more attentive and caring partner than her husband during such an intense experience.

Having a partner who can be there for you in any capacity truly does make a difference. So check out all the ways dads can help you when you’re giving birth.