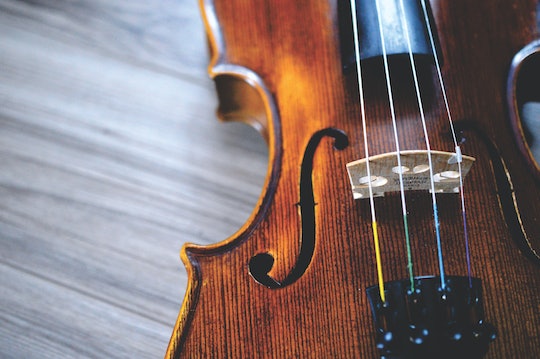 Most 11-year-old kids are busy riding bikes with their friends, playing video games, or staying after school for little league this spring. But there's one 11-year-old who conducted an entire 75 piece orchestra over the weekend in Nottingham, England. Yea, that's right. Makes you wish your own kids would just remember to brush their teeth before bed without a lot of hassle, right?

Matthew Smith led the adult musicians in a stellar performance of Johann Strauss’ operetta "Die Fledermaus" at the Royal Concert Hall in Nottingham in front of around 1,300 people. So it's not like he picked something easy for his first time.

Matthew is pretty low-key about his prodigy status, too, which makes him all the more charming. After the 9-minute performance he said simply, "it felt good." Talk about an understatement, because even just watching him feels great. Matthew saw two violinists at his Pentecostal church with his mom four years ago and told her that he wanted to be "just like them."

Luckily, his mom took him seriously. His mother, Beverly Riley, is a catering assistant at the area high school and she used her connection to ask the music teacher, Derek Williams, to help her out. Williams gave Matthew a beat up violin he found in a cupboard and gave the kid lessons. From the very first time, Smith knew exactly where to put his fingers — instinctively — and performed a scale right away. The rest, obviously, is history.

Matthew told The Nottingham Post it was a dream come true. He said:

I have never conducted an orchestra before, so this will be my first time. I love all the instruments coming together to make one amazing sound. I am kind of famous — some people ask for my autograph when I am walking to school now!

The 11-year-old added that, although he also plays the piano, guitar, and the drums, along with knowing how to conduct, he's not sure that he wants to stick to conducting — y'know, because he's just 11 years old and has a lot of life ahead of him. "I don't know if conducting will be my future but I will carry on doing music," Matthew explained. "I know one day that I will conduct again." But being an engineer is second on the list.

He added that he thinks just "staying in time and knowing when to go and when to stop" is what makes him a good conductor. "You just have to keep counting the beats," Matthew added.