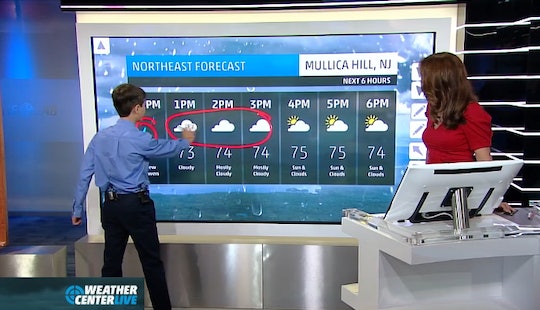 11-Year-Old Does A Perfect Weather Forecast

Some kids want to be entertainers. Other ones want to be professors. Maybe even a writer. Then there are those children, like Ryland Mishura, who want to be the next Al Roker. On Wednesday, the 11-year-old did a weather forecast as part of the Make-A-Wish Foundation, and it's a delight.

Mishura, who lives in Mullica Hills, New Jersey, has a rare, life-threatening genetic disorder. The pre-teen is absolutely fascinated by the weather and loves "predicting it — and the action of hurricanes, blizzards, and tornadoes," according to Make-A-Wish America's Facebook post. As part of his make-a-wish, Mishura wanted to visit The Weather Channel station in Atlanta, Georgia and predict the weather on live TV. The Make-A-Wish Foundation granted his wish and this week, the 11-year-old aspiring meteorologist made his dream come true on The Weather Channel's Weather Center Live.

His nearly four-minute segment is just a joy to watch. The weather-loving Mishura held his composure as he went through Mullica Hills' forecast, as well as the impending forecast for the Northeast region. Then he joined meteorologist Alex Wallace over at The Lab to give the seven-day forecast for the entire country. "This guy is a professional," Wallace said before the segment ended. "I can go take a break because this guy can handle the rest of it."

People seemed to absolutely love Mishura's forecast debut. Make-A-Wish's Facebook video of his visit was shared more than 150 times, received more than 1,000 likes, and had more than 42,000 views. Many Facebook users commented that they were "so impressed" by Mishura's composure and weather knowledge. Others called him a "brave young man" and congratulated him on "a great job." One person wrote, "Well done Ryland! I think you found your calling!"

Gramma & Grandpop are so very, very proud of you !! You did a fabulous job. Your are going to be one fantastic weatherman. We love you so very, very much.

The Make-A-Wish Foundation has granted wishes to children diagnosed with life-threatening conditions since the early 1980s. In 2014, Make-A-Wish granted its 250,000th wish in the United States, and had granted more than 334,000 wishes worldwide by that year, according to its website. Make-A-Wish's New Jersey chapter, which helped make Mishura's dream come true, granted over 400 wishes in 2016 alone.