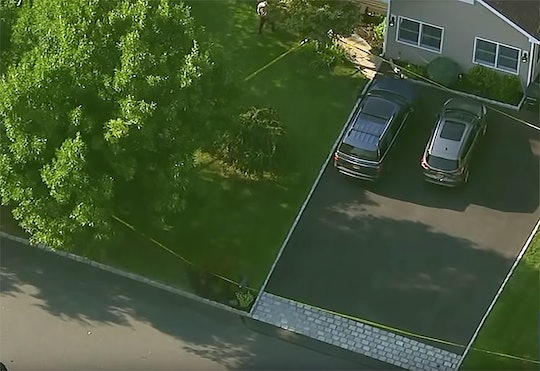 A troubling number of children die in hot cars every year, and it's heartbreaking fact the public was reminded of again this week. On Tuesday, as the New York Post reported, an 11-year-old girl died in a hot car after she was found in her home's driveway following a family shopping trip.

The incident occurred after the child — along with her mother and two other siblings — pulled into their home's driveway in Coram, Long Island, according to ABC 11 Eyewitness News. Local authorities confirmed to the New York Post that the mother and siblings entered the family home allegedly unaware that the young girl was left behind in the car.

Once the mother couldn't locate her daughter sometime later, she checked inside the car, where she found the child in need of CPR, as police told ABC 11. Sadly, the girl was later pronounced dead at Stony Brook Hospital.

The Suffolk County police department did not immediately respond to Romper’s request for comment.

Although it hasn't been confirmed by authorities or family members, multiple outlets reported the girl in question reportedly "had some form of disability," as noted by ABC 7. “Sweetheart, absolute angel. Just the sweetest little baby girl,” neighbor Carmela Parlato described the child, according to KHOU 11.

Late Tuesday evening, Suffolk County police confirmed the events leading up to the hot car death in an official statement that read, according to North Fork Patch:

The temperature in Coram on Tuesday reached 92 degrees, according to WPIX, and it's not clear how long the girl was left alone in the car. As ABC 7's Lee Goldberg shared on Twitter, temperatures inside the car could've reached anywhere between 109 to 124 degrees.

Lt. Kevin Beyrer elaborated on the sad circumstances, telling the New York Post: “It’s a tragedy. It’s similar to a drowning. It’s something that doesn’t happen every day. It’s an unspeakable tragedy."

Although this incident is difficult to think about it, it's important parents pay attention to stories like this one and statistics regarding hot car deaths to avoid future tragedies. The "total number of U.S. pediatric vehicular heatstroke deaths" in 2018 thus far is 37, which is six deaths below the total number of pediatric vehicular heatstroke deaths in 2017, according to No Heat Stroke.

Additionally, out of the 700 pediatric vehicular heatstroke deaths between 1998 through 2017, 54 percent of them occurred because the child was forgotten by a caregiver, No Heat Stroke found.

At this time, it's not clear if the mother in this case will face any charges related to the incident, according to KHOU 11. What is apparent, however, is the need for increased awareness regarding hot car deaths and how to prevent them.

For instance, there are plenty of ways to actively prevent hot car deaths. American Academy of Pediatrics recommends:

Always check the back seat and make sure all children are out of the car before locking it and walking away.

Be extra alert when there is a change in your routine, like when someone else is driving your child or you take a different route to work or child care.

Have your child care provider call if your child is more than 10 minutes late.

Put your cell phone, bag, or purse in the back seat, so you check the back seat when you arrive at your destination.

If someone else is driving your child, always check to make sure he has arrived safely.

Additionally, always be sure to lock your car and keep your keys close when it's not in use.

Lastly, consider buying technological devices that help prevent hot car deaths. There are plenty of options available on the market that use sensor and alert systems to help parents keep their kids safe.

On a political level, parents can reach out to their representatives to lend support for hot car death legislation. The Helping Overcome Trauma for Children Alone in Rear Seat Act of 2017 (Hot Cars Act), for example, proposes that "all cars be equipped with technology that alerts drivers when a passenger remains in the backseat after a car is turned off," according to Cars.

Prevention methods and awareness methods are crucial, because, as the AAP states: "Any parent or caregiver, even a very loving and attentive one, can forget a child is in the back seat."

Whenever a tragic car death occurs, like the devastating incident in Coram, it's easy to feel at a loss for words or even angry. But it also serves as a heartbreaking and startling reminder of how important it is to be aware of these dangers.