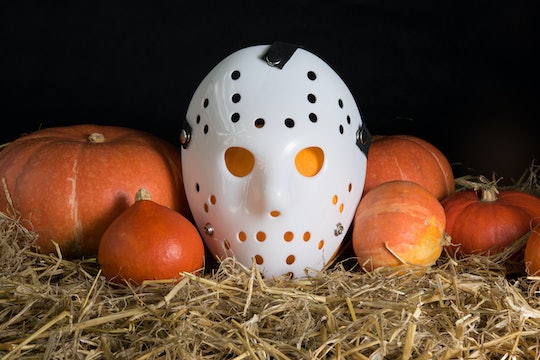 I've been a scaredy-cat ever since I was a kid. Movies like Gremlins, Halloween, and Friday the 13th terrify the bejesus out of me and give me literal nightmares, so I've stayed away from them since the time someone tricked me into watching Child's Play by telling me it was a kid-friendly film. (I still haven't forgiven her for that). I've always felt left out of horror film culture because people who enjoy it seem to have so much fun being scared. But these Friday the 13th memes that are sure to make the rounds on your social media feed are usually more funny than frightening.

Besides the classic slasher flick with the iconic villain Jason Voorhees, many people consider the actual date of Friday the 13th unlucky, even though it's a relatively new superstition, reported Vox. Whether you'll be watching a gory movie in anticipation of Halloween next month or ducking bad omens, kick back and enjoy a few memes today. Some of these are for the superstitious, while others are for you Friday The 13th movie fans. Unlucky 13 or not, we're all lucky when the internet joins forces for laughs. And I'll be chuckling along with everyone else... from behind my security blanket.

More Like This
Up In The Middle Of The Night? We've Got Instagram Captions For That
20 Toys You Don’t Want To Miss From Amazon’s Top Toys List Of 2022
56 Pumpkin Captions For All Of Your Most Gourd-geous Photos
Can Elderberry Help Prevent Illness In Kids? Doctors Weigh In