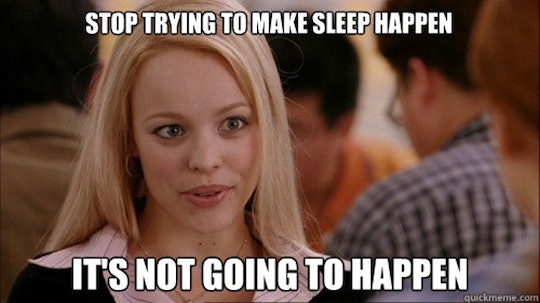 New Year's Eve is the biggest party day of the year when everyone tends to celebrate in some way. It's the one day where it's not only okay, but sometimes expected, to stay up late (that's the whole point), get super drunk, and wear glittery dresses with no tights in the dead of winter — ugh, remember when you thought that was a good idea? But there comes a point when NYE loses it's sparkle, because of one word: kids. If you're not partying like you used to this NYE, post a hilarious New Year's Eve meme to express how your night is really going.

We can all agree that kids are a huge game changer. You went from once popping Champagne bottles to now struggling to stay up until midnight. How did we ever party like that? Now just going to the movies is a big night out and even bigger if you can stay awake. But you can't just forget about New Year's Eve completely. I mean yes, you don't party like you used to because you literally can't now that you have kids, but New Year's Eve is still an occasion that you don't want to miss out on completely.

Maybe, it's because you are over the crowds, drinking was never you're thing, or you just can't bear to splurge on a babysitter for a ridiculous night of debauchery — whatever the reason your New Year's Eve celebration is not like the years of your youth, here are some hilarious New Year's Eve Memes for parents that pretty much sum up your night perfectly.