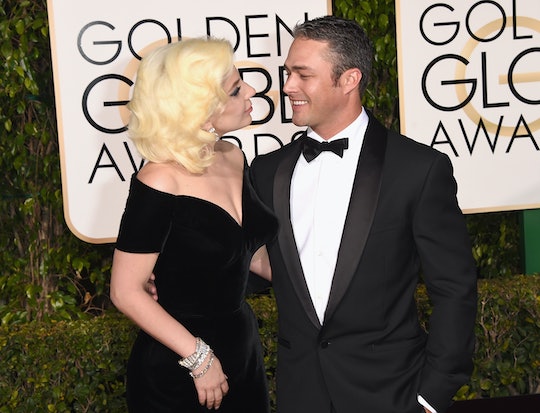 I need to figure out a way to deal with how much I love looking at photos of Lady Gaga and Taylor Kinney, because it's starting to get a little unhealthy. Like, I can admit that seeing Gaga and Kinney together on the red carpet makes me a bit more swooney than I should admittedly ever be about a relationship I'm not personally a part of. And honestly, I can't even really figure out why it is that I get so goo-goo (you totally thought I was going to say "gaga") over these two... Maybe it's because they are lowkey the most honestly aspirational celebrity couple.

No, seriously, think about it: Lady Gaga having the beautiful Taylor Kinney be so demonstrably adoring of her entire being is the realized dream of every young weirdo who ever probably felt like the same qualities that made them uniquely awesome might also make them unlovable to most people. And Taylor Kinney winning the affection of someone as overwhelmingly, intimidatingly incredible as Lady Gaga is the realized dream of everyone who was ever in love with someone who felt so unknowably, unattainably brilliant, next to whom they felt overshadowed and plain. And yet, there they are, so clearly in love and supportive of each other in a relationship where both appears to be very free to be exactly who they are, and are wildly seen and celebrated for being exactly that.

Yeah, it's that's not relationship goals personified, I don't know what is.

Also! They're really pretty to look at, so let's look at them!

I wish I was so in love with someone that I made awkward euphoric concentrating faces every time they whispered something in my ear.

I usually think that red carpet kisses are cheesed out as hell, but I'm not gonna lie: would watch these two make out all day.

This is the face of a woman who is (understandably) very happy with all of the awesome things in her arms, on her arms, and the arms around her. Living her best life.

Two people who are secure enough in their relationship to allow each other to go off on their own because their connection to one another is so unshakable and unquestionable that they don't need to be all up in each other's space all the time to prevent each other from getting insecure and weird is the actual relationship dream that I can only describe in a run-on sentence and I'm pretty sure this photo embodies it very nicely.

Not mad about it.

*Changes Tinder profile to read: "Swipe right if interested in sexing on a canvas."*

Look, a woman doesn't need a man to watch her step for her, but like, men are right there waiting for us to employ them for this purpose, so why the hell not? Gaga feels me.

Do you even know how rare it is to see a couple selfie where neither party looks like they were begrudgingly forced into taking it? That never happens, they are a rare unicorn of perfect love.

I'm not saying a giant, heart-shaped engagement ring is what it takes to prove your love to someone but like, it sure as sh*t doen't disprove it, ya know?