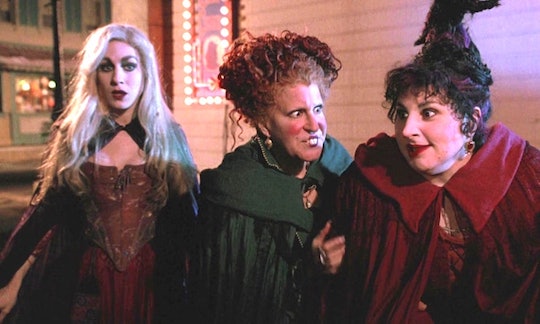 Friends, October is here and that means only one thing (for me, at least). It meansit is time to re-watch the best Halloween movie of all time: Hocus Pocus — the timeless tale of three misunderstood sisters just trying to survive in this cruel world. But as much as I love it, that doesn't mean there aren't still some questions that I'm sure you've wondered about as well. So in keeping with the spirit of the holiday, I've outlined questions you may still have about Hocus Pocus that could potentially put a spell on your viewing experience from here on out.

If you haven't seen Hocus Pocus, I highly recommend you drop everything and go watch it this very instant. If you have seen Hocus Pocus, then you will know that it is a classic tale of witchcraft, talking cats, young love, and incredible hair. Basically, in the late 17th century, the Sanderson sisters, Sarah, Mary, and Winifred, are hanged by the narrow-minded townsfolk for witchcraft. In the townsfolk's defense, they were sucking the souls out of children. However, the sisters manage a loophole, and thanks to a Black Flame Candle, a virgin, and a full moon on Halloween night, the three women are risen from the dead to wreak havoc on suburban Salem until they are thwarted by three plucky kids.

Cinematic masterpiece it may be, that does not mean there aren't a few narrative discrepancies that I would very much like to see cleared up. For example...

1. When Did The Witches Coordinate Their Musical Number?

In one memorable scene, the Sanderson sisters chase Max, Dani, and Allison to the big town hall Halloween party where all the adults are dancing the night away. Max jumps on stage and interrupts the band to expose them, but Winifred out-maneuvers him by seizing the spotlight and launching into an impromptu rendition of "I Put a Spell on You." She may have changed the lyrics, but she seems to know the melody pretty darn well. The spotlight follows her around, the band knows the precise arrangement she's going for, and the bandleader does not at all mind the sudden program switch. Did they show up for soundcheck sometime off-screen? I want answers.

2. Where Are The Babysitters?

At the end of Winnie's sudden song-break, she bewitches all the grown-ups to "Dance! Dance! Dance until you die!" which they proceed to do. My only question here is where the heck are the babysitters? If all the parents in town were out until six in the morning, wouldn't they be freaked out? And what about when Sarah sang to all the children of Salem? Why weren't there any babysitters trying to stop the kids from going to the witches' cabin? Someone please explain this to me!

3. What Is The Exact Nature Of Witch Mortality?

The villagers managed to kill the witches (for 300 years) by hanging them. However, they did not die when Max, Dani, and Allison roasted them in the school's kiln. Why? Are they just impervious to fire? Does it have something to do with the spell? I am very confused about witch biology right now. Is there some sort of fire or furlough claus in the witches' contract with the devil? This seems suspicious.

4. Where Does Mary Get Her Hair Done?

The middle sister (I'm assuming she's the middle sister), Mary, sports a killer 'do that spirals at least six inches high with some punk rock purple highlights. I'm fine with the idea that a witch in the 1690s would have purple streaks in her hair, I would just like the name of her stylist. Asking for a friend.

5. When Did The House Become A Museum?

According to the story, the witches were executed in the 17th century by the villagers because they are evil. OK. Fine. But at what point in history did somebody decide to preserve all the witches' evil stuff exactly as they left it, including Sarah's lucky rat's tale above the door? Whose idea was it to prominently display precise instructions for raising them back from the dead? And for that matter, if Binx spent all this time guarding the museum, why didn't he just knock over the black flame candle and then drag it and hide it somewhere. I just feel like a lot of this could have been avoided.

6. Why Did They Bring Back Billy?

At one point, the witches raise somebody from the dead and enlist him to capture the kids. Great plan! My real gripe here is why would you pick your ex-boyfriend for the job? According to Binx, Winifred had a thing with Billy, but then poisoned him and sewed his mouth shut with a dull needle when she found him fooling around with Sarah. Hey, no judgments. But if you bury your ex-boyfriend, shouldn't you keep him buried instead of trying to get him to do your dirty work? Breakups 101, Winnie.

7. How Does Winnie Know About Driver's Permits?

At one point, the sisters board a bus in their trek to capture Max, Dani, and Allison, though not without some serious confusion first. This is very understandable. There were no buses in colonial times! They are also tricked by Max into thinking the headlights of the car is the rising sun. OK, I'll buy it! However, near the end of the movie when they try to stop the three kids in the car, Winnie tauntingly asks Max to pull over so she can see his driver's permit. How does she know about driver's permits, exactly, if she's so confused about everything else vehicle-related? The people want to know.

8. Why Didn't Binx Ever Tell His Parents He Was A Cat?

It is unclear at what point in history Binx developed the ability to speak. Right after the witches turn him into a cat he behaves very much like a regular cat, trying to get his dad's attention by weaving around his ankles and meowing. But if he could speak, why didn't he just say "Hey dad! They turned me into a cat!"? His dad at least believes in witches and would probably be less freaked out than Max and Dani were.

Sister Mary's magical gift is the ability to smell children, apparently even through puberty since teenagers like Max still make the cut. My question here is what do kids smell like, exactly? Peanut butter and jelly sandwiches? Johnson & Johnson shampoo? Can you describe this smell, Mary?

10. Where Was Emily All This Time?

At the very end of the story, when Binx turns back into a human and then heads straight into the light at the end of the tunnel with his sister Emily, she asks what took him so long. So where, exactly, was she? What was she doing? Was poor Emily stuck in some sort of magical purgatory or was she simply waiting for him to join her in the afterlife? Why did this movie not delve deeper into this metaphysical quandary?

11. Did Max Keep His Promise To Dani?

As a way to convince Dani to go to the Sanderson house in the first place (in order to hang out with Allison), Max makes a deal with Dani to go trick-or-treating as Wendy and Peter Pan for the next Halloween. Did he make good on that promise or did the excitement of that year kinda put those plans on the back burner?

12. Will Max Not Live As Long After His Encounter With Winnie?

Max heroically gives himself up to the witches to save his sister, and Winifred begins the process of physically sucking his soul right out of his body. My question here is how far did she get? She was stopped before she could finish him off, but will this have any lasting impact on the rest of his life? Is his life expectancy now shorter since some of his soul was taken from him? There has to be some sort of medical repercussions for that procedure, right?

The moral of the story here is that nobody in this story is particularly smart, especially Max, the genius who lit the Black Flame Candle to begin with. None of this will really alter my enjoyment of Hocus Pocus of course, but if anybody has answers to any of these questions, they would be much appreciated.