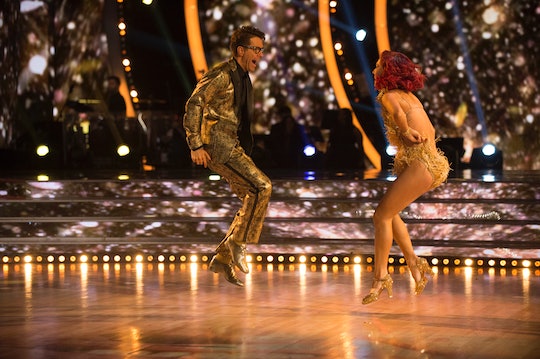 If you missed Monday night's episode of Dancing With the Stars, it was a doozy. The semi-finals of the dance competition had a strong lineup from all dancers, but the real shocker came at the end with the double elimination of Grocery Store Joe with pro Jenna Johnson and — get this — Juan Pablo Di Pace and pro Cheryl Burke. Did you gasp? You should gasp because that means there's at least one contender left fans don't agree with. Of the reactions to Bobby Bones making the DWTS semi-finals with pro partner, Sharna Burgess, Bobby tweeted shortly after, perhaps poking fun at the situation, saying, "I can't believe Grocery Store Joe went home! I see why everyone is pissed!"

If you were to research who viewers pegged to win the Mirrorball trophy for Season 27 of the reality dance series, they likely wouldn't say Bobby Bones — radio talk show host and beloved by a lot of people, apparently. Juan Pablo had been the most consistent from the start, with perfect or near perfect scores week after week (he had two perfect scores in the semi finals). It was kind of a given Alexis Ren and pro Alan Berstain would go all the way — especially now that they're relationship official. Evanna Lynch and pro Keo Motsepe have flown under the radar but also breezed through to the the finals. And last but certainly not least, Milo Manheim and pro partner, Witney Carlson, I think, have also been overlooked as strong contenders for the win.

No disrespect here, Mr. Bones. I think Bobby has tons of charisma and personality; he's relatable and likable, for sure. Plus that Len Goodman shirt surprise after the second dance of night just made me feel good (who's with me?). But some of the internet thinks America got it wrong, and Twitter has opinions (per usual) on who should've advanced, and who definitely shouldn't have. Spoiler alert: the man has allies and enemies so it's really a toss up as to whether he'll actually win. But isn't that the beauty of the show — non dancers transforming into some form of dancer?

More Like This
What Parents Need To Know About Marvel's New She-Hulk Series Coming To Disney+
The Worst Fake Babies In The History Of Movies & TV
10 Cozy, Romantic, & Drama-Filled Shows To Watch If You Love 'Virgin River'
'Virgin River' Fans Can't Stop Cracking Jokes About How Charmaine Is *Still* Pregnant