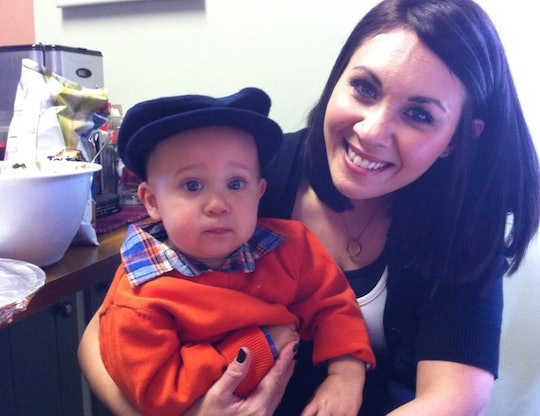 What My Son Should Know About My Estranged Parent

For most of my adult life, I searched for my biological father. To this day, he remains an imprint; an image of a man I store in my mind, but it's not weighted enough to ground me to the reality that I'll never see him again. If anything, I cling tight to a false hope I might find all the answers I need, someday. Of the things I'll tell my son about my estranged parent when he eventually asks, the most important is how I'll sooner die than let him feel the void I've carried as a result of not having my father in my life.

I remember bits of him from early childhood and, honestly, those blips of memory continue to fade with time. I was raised by my mother and a father who claimed me as his own (whom I called, and continue to call, dad). However, as the dark girl with the dark hair, I'd always been the outlier, especially after the birth of my blonde-haired, blue-eyed brother. I longed for a sense of belonging, but never quite found it. Those few memories I have of my biological father aren't enough to sustain me. He was a shadow, lurking behind the curtains to watch me grow from afar, but didn't muster the courage to fight for rights to me. It's something that burns me to this day.

The last time I saw this man — a stranger — I was in high school. He never explained what kept him away, so I decided not to pursue the relationship any further. It was a difficult decision, because there was so much about me I needed to know and I believed he held the answers. Later, I found out the night we reunited was the day he had been diagnosed with a cancer that would kill him a few years later. It's a fact I wouldn't discover until I was pregnant with my son, whom I planned to name after him. He died at 44 years old, four years before I searched for him again. Listed in the obituary as his only child? Me.

There's a lot of pain that fills me in the creases of this journey. Things I'd rather forget, things I wish I could know, and mostly, all the things he took to the grave that I will never know. About my colorful heritage. My family history and his experiences that led to the discovery of the cancer (will I get it, too?). So much was left unsaid and undetermined when he went and, now, I'm forever trapped in an aftermath of what ifs.

The details of his absence are relatable. He didn't have a steady job and couldn't provide. My mom, and the man I call dad, did what was best at the time and not knowing the internal restlessness I'd feel in being "misplaced." I always felt as though something was missing, so when I grew old enough to know the truth, it became clear. The thing that was missing was the kind, compassionate man with the dark skin and dark hair whose laugh still echoes between my thoughts.

As a grown woman and parent myself, I understand why certain choices were made. Still, I continue to struggle with the acceptance of it all. Maybe because, with his death, it's so final and I can never receive what I'm after. However, I know one day my boy, who is named after my father, will ask questions. Questions I'm ready to answer because, if anything, my children deserve to know their heritage, their family history, and their mother's journey to get to where she is now.

More Like This
Sex And Mom Guilt: When I Date Someone New, Am I Cheating On My Kids?
12 Helpful Tips For Hiking With Kids
15 Adorable CoComelon-Themed Costumes You Can Buy Or DIY
No Sex Drive? Here's Why & What Might Help