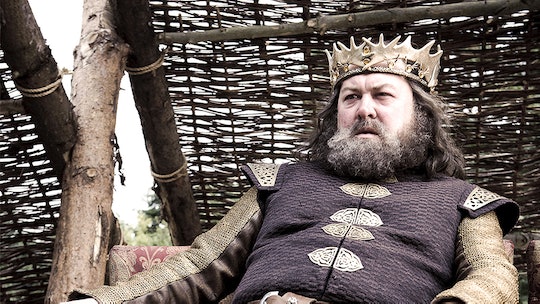 12 Things Only Someone Who Belongs In House Baratheon Knows

When it comes to choosing favorite Game of Thrones houses, it is an interesting, diverse, and select few who choose House Baratheon. That's not to say that the Baratheons have nothing to recommend them — they absolutely do — but the truth of the matter is we don't see too much about their lands, castle, or family. The only real glimpse we get of the clan is via the three brothers: Robert, Stannis, and Renly... and two of those blokes have kicked the bucket since episode 1. (Spoilers? Too late for that. Whatever. The show's been on since 2011. That's on you. Also, it's Game of Thrones. You don't have to know much about the show to know that a character has probably died since the beginning of the series.)

I've always thought of the Baratheons as a Texas football family. They come from a tough part of the country, which translates into a certain roughness in themselves. They're very proud and often stubborn. They're competitive with themselves and others, and the idea of losing is not a thought they entertain for an instant. Over the course of Game of Thrones, those who identify with House Baratheon have won battle here and there, yes, but more importantly they have won some important life lessons and hard truths.