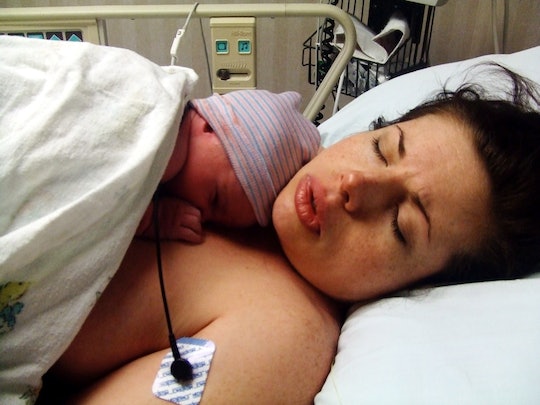 The mere thought of having a c-section, as opposed to a vaginal birth, draws up images of a cold, sterile table, lots of surgical instruments, and rare but scary scenarios. But the truth is, what to expect during a c-section is a bunch of the most natural, normal things that pretty much every c-section mama has gone through. C-sections are now just as common as vaginal births and in no way signify that you weren't "strong enough" or "good enough" to deliver your baby vaginally. When I was told that I would be having a c-section — after three days of labor and then a good four hours of pushing (yes, those numbers are accurate) — I was terrified. I had never experienced any kind of surgery before and the thought of having my baby pulled out of a gash in my stomach didn't sound as easy as the doctors and nurses made it sound.

And as scary as it all was, everything I had gone through during my c-section was totally normal and (despite how some people want to define the word) natural. Even the sharp pressure of the scalpel and losing enough blood to need to make use out of the hospital's blood bank. While I wasn't really sure what to expect from a c-section, though, I can at least agree that putting your trust in the hands of doctors is also a very natural thing, and far from the cop out that some people like to label c-sections as. Most of the things you experience during a c-section are normal things and here are just some of them to make you feel a little less worried about your own experience.