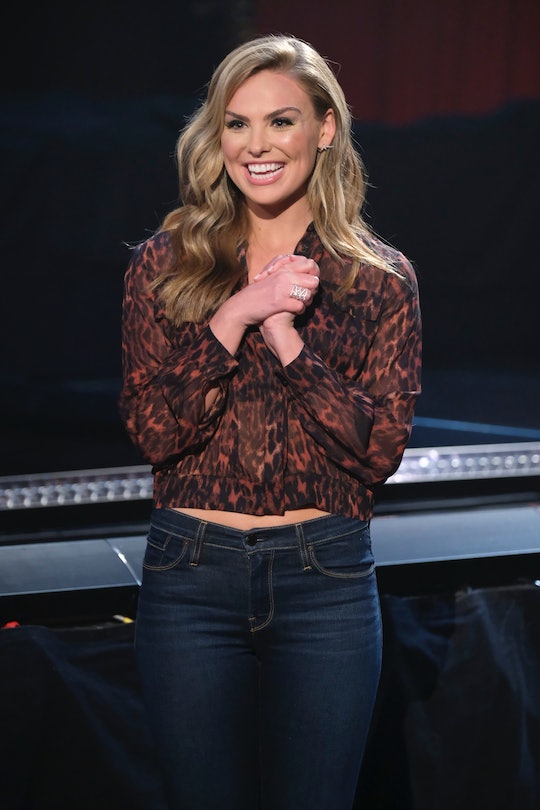 Chicken Nuggets Are Causing Major Beef With Fans Of 'The Bachelorette'

There’s a breakout star on this season of The Bachelorette, and it’s not any of the hunky men vying for Hannah’s affection. Chicken nuggets (yep, you read that right) have been making a weekly appearance on the show, leaving fans so intrigued that they turned it into a Twitter Moment on Monday night. So, if you want to see what the fuss is about, check out these hilarious tweets about chicken nuggets on The Bachelorette.

These tiny fried chicken bites made their first cameo on Episode 2, when Cam interrupted Kevin’s time with Hannah to set the three of them up on a driveway picnic. As if the planned three-way date wasn’t weird enough, Cam presented Hannah with a tray of chicken nuggets and container of honey mustard sauce in a ring box. “When we had our first one-on-one here, we had a fun-loving, joking conversation about how picky of an eater I was,” he tells her. “That being said, I got us some nuggets here. And Hannah, will you except this honey mustard?”

Hannah seems to think the whole thing is kind of funny, but Kevin storms off, with the tray of nuggets in hand. Later, he tells the rest of the men about Cam’s “nugget ceremony” stunt, and eventually confronts Cam. “I just wanted to address it really quick, I just think you just coming at a really weird angle with trying to impose your will,” he says before he chucks a hand full of nuggets at Cam’s chest. “I think what you did with me tonight was honestly ridiculous as well, and with the whole chicken nuggets thing, I think you can honestly go [bleep] yourself dude.”

Fans took to Twitter to talk about the fast food drama between Cam and Kevin, an plenty were intrigued.

Some fans thought the whole nugget throwing debacle was hilarious, and they applauded Kevin's successful trolling of Cam.

But after they bounced off of Cam’s chest, the chicken nuggets that fell to the ground were not forgotten by Hannah or the fans.

In Episode 3, Hannah and Jed spend some alone time on an L.A rooftop. Between all the kisses and romantic banter, Jed decides to make a big romantic gesture with, you guessed it, chicken nuggets. He pulls two, unwrapped, unboxed, loose nuggets out of his jacket pocket (which means he smelled like fast food the whole time they were making out), and asks Hannah to make a wish. “I believe it is good luck to make a wish, and you can’t tell me what the wish is until I get a one-one one,” he says, as he hands her the meat. “You gotta chuck this chicken nugget off the roof and make a wish.”

The two love birds hurl the nuggets into L.A.’s glistening night sky, leaving fans to question why they’re witnessing so much nugget abuse this season.

Some viewers couldn't help but wonder where the poor nuggets landed.

Fans couldn't help but notice that chicken nuggets are becoming the theme on this season of The Bachelorette, with some wondered how far this phenomenon will go.

The future of chicken nuggets on the show is still unclear, but after seeing them suffer so much rejection, I know fans are hoping they get a little more respect as the season rolls on.

New episodes of The Bachelorette air on Mondays at 8 p.m. ET on ABC.