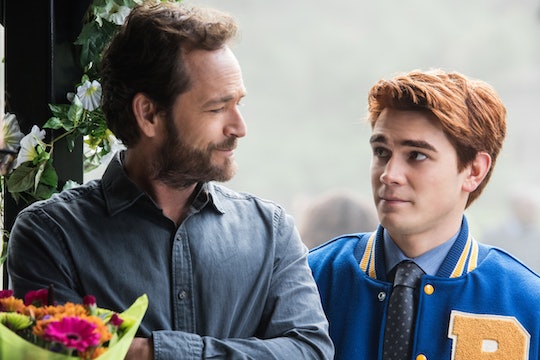 When ‘90s icon Luke Perry passed away in March, the world was left shocked and devastated. He had won over a new generation of fans with his portrayal of Archie’s dad, Fred Andrews on the CW series, Riverdale. People are getting emotional about seeing his last scenes on TV, and these tweets about Luke Perry’s last Riverdale episode show just how much fans will miss him.

On March 4, the 52-year-old actor unexpectedly passed away, reported Reuters, just one week after experiencing a "massive stroke." Perry first rose to fame with his role as Dylan McKay on the ‘90s hit show, Beverly Hills 90210, and quickly became the heartthrob of a generation. His fan base grew exponentially when he took on the role of Fred Andrews on Riverdale, but when the shocking news of his death spread, all of his fans were left sad and confused.

Perry was in the middle of shooting Season 3 of Riverdale, but fans didn’t know when or if they would see him again until showrunner Roberto Aguirre-Sacasa tweeted details about his last episode. "This week’s #Riverdale is the last episode Luke filmed," Aguirre-Sacasa wrote in his Sunday, Apr. 21 tweet. "As always, Fred’s imparting words of wisdom to Archie. A beautiful, true moment between a father and his son. Wish these scenes could go on forever."

Upon finding out that the Apr. 24 episode would be the last time viewers would get to see Perry as Fred Andrews, fans realized that this was the end of an era. This isn’t just the last time they’d get to see Fred, it would also possibly be the last footage of Perry anyone would ever see. Fans tweeted about how hard it would be to watch his last TV performance.

People also took to Twitter to share the heartbreak and sadness they would feel seeing Perry in his final Riverdale scenes.

Saying goodbye to your favorite characters on TV is hard enough, but knowing that Perry is gone in real-life makes it much harder to watch his final Riverdale scenes. Fans tweeted about how sad they were, and how they would be watching the episode through tears.

Riverdale will go on with Archie and the rest of his friends and family, but fans aren't interested in seeing Fred come back with another actor in Perry's place. They were very clear that no one could ever fill Perry’s iconic shoes, and they hoped that the show wouldn't try to replace him.

Many took to Twitter to share their emotional connection to the actor. Some shared stories of how they fell in love with him on Beverly Hills 90210, and others talked about how much he inspired them. Some fans, who felt Perry was the best TV dad out there, tweeted about the big emotional void he's leaving behind.

Perry was only 52 when he suffered the massive stroke that eventually led to his tragic death, so some people took to Twitter to to raise awareness about the signs and dangers of strokes.

It's still not clear how Riverdale will address Fred's departure from the show. But no matter how they do it, Perry's final episode is going to be a tough watch, so you may want to keep a box of tissues handy.