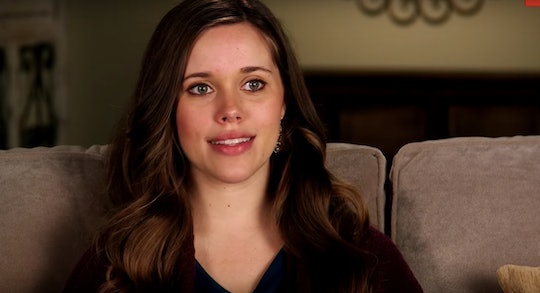 The Duggar family first appeared on TLC's 17 Kids and Counting, which later became 19 Kids and Counting after Jim Bob and Michelle gave birth to their youngest, Josie, in 2009. Since then, a spinoff that follows the Duggar kids and their own children, Counting On, has hooked fans of the family who've gotten to know them quite well. There are rumors of new babies on the way, too, but, while you wait, let's dive into 13 fun facts about Jessa Seewald-Duggar.

Fans think that Jessa, 25, might be pregnant again with a third baby after she and Ben, 22, were seen celebrating her little sister Joy-Anna's pregnancy and followers noticed the placement of Ben's hand cradling her belly in a photo shared on the family's Facebook page, according to In Touch Weekly. The couple is already parents to sons Spurgeon Elliot Seewald and Henry Wilberforce Seewald.

It wouldn't come as much of a surprise if the rumors turned out to be true. Even after starting a family of her own and beginning her own journey, Jessa's still committed to her faith and has made it clear that she wants more children on the couple's blog. Her hope for the future is to accomplish more "outreach in [their] community, sharing the gospel of Jesus Christ, and adopting lots of children!" So what else do we know about Jessa besides rumors that she's pregnant again?

Jessa and Ben, who is also from a large family, want to raise a big family and have indeed considered adoption. "We are talking about our goals and even just like future, with family, we both talked about adoptions," she reportedly told People. "We are open to having children and both want to adopt, too.

2. She's not into Halloween.

Their children will most likely not be dressing up for Halloween. According to E!, the Duggars think magic and witches are "part of a demonic realm God wants us to stay away from."

There probably won't be any fam beach trips either. Women wearing bikinis are dangerous for the Duggar men and husbands, as "it's just too hard for [them] to try and keep their eyes averted," Michelle reportedly told E!.

Jessa was homeschooled and her mother, Michelle, incorporated creationism and Bible study into her curriculum.

The Duggar daughter went skydiving for her 18th birthday.

7. She and Jinger are best friends.

Jinger said in a video by Us Weekly that she had a hard time with Jessa Duggar's wedding, because she realized it would affect their relationship going forward. "It was super hard, just those moments right before Jessa got married realizing that our relationship was going to change," Jinger said in a sneak peak for 19 Kids and Counting. "That was a really tough time."

8. To-do lists give her satisfaction.

She's super organized, likes having a schedule and feels aimless without set goals.

9. Organization is key to her life.

She's so organized, in fact, that it's Jessa's job to pack all the suitcases when the Duggar family takes a trip, which entails lettering the suitcases from A to Z. She's packed more than 500 suitcases in her lifetime.

One time, she accidentally sipped spiked punch, but she's not allowed to drink alcohol. She thought it was disgusting anyway.

11. Her parents were always watching (and reading).

Her parents were CC'd on her texts with husband, Ben Seewald before they got hitched. Ben once jokingly texted, "Give me a ring," and Jim Bob replied to the group text, "No ring yet," with a smiley face emoji, according to E!.

12. She never went out on dates alone.

All of her dates with Ben were also chaperoned, meaning her parents actually accompanied the couple in order to maintain their "accountability." Jim Bob reportedly told E! that it "keeps things from going in the wrong direction."

13. She and Ben saved the mushy stuff for after their wedding.

Prior to tying the knot, Jessa and Ben only gave each other side hugs in order to avoid further temptation that could come with chest-to-chest contact. She and Ben didn’t even hold hands until they were engaged, and they only kissed after their wedding.

You can keep up with Jessa Seewald-Duggar and her family nowadays by checking her Instagram where she's always posting photos of her adorable sons doing adorable things like rocking matching onesies or tasting new foods for the first time.

More Like This
Kim Kardashian Stars In Hilarious House Of The Dragon Parody, The Targashians
Lifelong Teacher Dr. Jill Biden Loves Watching Abbott Elementary Too
10 Parenting Lessons From Abbott Elementary That You'll Want To Write Down
10 Facts About 'The Nightmare Before Christmas' That May Surprise You