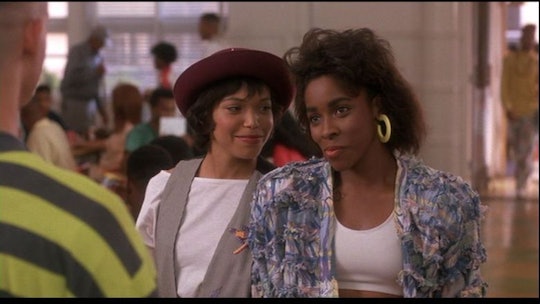 13 Of The Most Outdated Hairstyles From '90s Teen Movies

If we're talking '90s, you can't get too far without mentioning two important staples of '90s culture: hairstyles and classic teen movies. Most of the inspiration for the cool girl's hairstyles came from the big screen, and though these dos were al that back in the day, there are some horribly outdated hairstyles from '90s teen movies that deserve honorable mentions, if only for nostalgia's sake.

Growing up, people didn't really notice the tackiness that was oh-so-'90s. But then again why would they — at the time everything was all that and a bag of chips. With examples like Gwen Stephani's mini-buns, Drew Barrymore's floral up-do, and Brandy's cascade of braids, what was a teen to do? They couldn't help but be enamored by these now outdated hairstyles, and I know you'd be lying if you said you never tried to copy them at home.

As a '90s girl, it's pretty safe to say your bathroom was fully stocked with a crimper, too many butterfly clips, at least one handkerchief, a hairagami, and enough hairspray to make the '80s jealous. While these movies adding fuel to the fire, '90s hair was truly a beast of it's own. The only question is— which one did you rock?