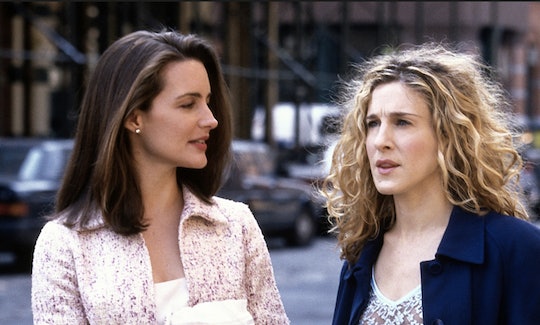 13 Outdated Dating & Relationship References On 'Sex And The City'

As a writer who's penned a sex column in the past, I owe a lot to Carrie Bradshaw. Yet when I pause to think about how much has changed since the 12 years the show went off the air, the outdated dating and relationship references on Sex and the City are totally comical. This fictional anti-hero made writing about relationships not only seem super cool and erroneously lucrative, she legitimized the idea that some women can spend hours having an inner dialogue about nothing other than dating and relationships. Even as I write this I cringe, because while I do spend a lot of time pondering dating, I also have an inner dialogue about, well other stuff. Like family, books, politics, spirituality.

Don't get me wrong, I love the show. And every time I start an article with a rhetorical question, I think of Ms. Bradshaw. Even though the show wrapped so long ago, you don't need me to tell you that it's still relevant as hell. Before reality television took over the airwaves, this show held a magnifying glass to the dating habits of New Yorkers and covered every absurd relationship mishap in a way that was pioneering and mostly empowering to women. But, we're in the new millennium, folks. So while Carrie Bradshaw may remain a golden goddess in pop culture forevermore, there are a couple dating and relationships references on the show that have become flat out archaic.