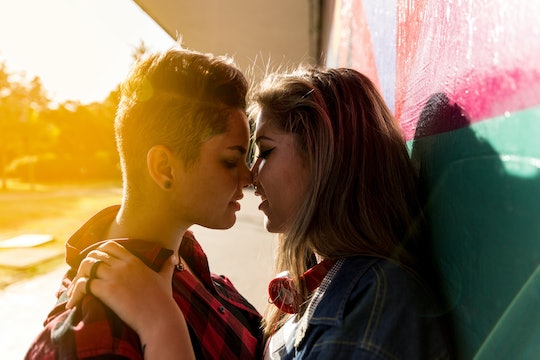 It's pride month, so you've probably been seeing quite a few memes floating around to commemorate it. Whether you identify as a member of the LGBTQ community or an ally (of which we all should be), here's a great list of pride month memes, because sometimes a meme says it all.

Pride month is celebrated every June, chosen to honor the Stonewall Riots of 1969, the year when "New York City police raided the Stonewall Inn, a gay club located in Greenwich Village in New York City," according to History.com. The raid itself subsequently laid the groundwork to kick off the gay rights movement around the world, explained the site. The riots led to "numerous gay rights organizations, including the Gay Liberation Front, Human Rights Campaign, GLAAD," and more.

While pride month is certainly a serious time of reflection and solidarity, it's also a time for a little fun and one way to celebrate the message of pride month is through memes. The pride movement has come such a long way, and that's good news for all of us, gay, straight, or anywhere in between. Let's all take a minute to enjoy these sassy memes to celebrate, and share them on your own social media feeds to show your support!