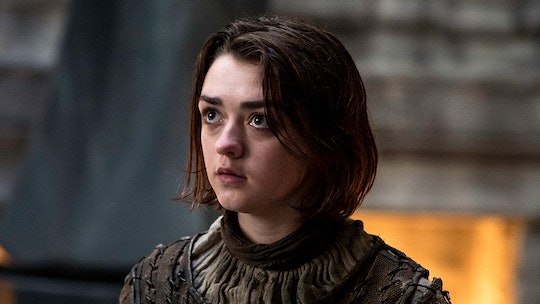 13 Reasons Arya Stark Is The Daughter Every Mother Dreams Of

Game of Thrones is a show chock-full-o-complicated characters. Some are irredeemably evil, like King Joffrey. Some are irredeemably evil, but contain a depth that makes us love to hate them, like Tywin or Cersei. Others are so morally complex and screwed up that you love them despite some pretty huge, glaring flaws. There are very few characters, however, that have the ability to inspire uncomplicated, unequivocal fan love: Arya Stark is one of them.

I will level with you: Arya is not my favorite (#TeamJaime). In fact, she's not even my favorite Stark child (#TeamSansa). Yet even I cannot deny her awesomeness. From Maisie Williams' impeccable performance to the character's insane journey around the world that takes her from lord's daughter shape-shifting assassin, Arya is just one of those girls you can't help but root for. Something tells me she still has an important role to play in the fate of the realm. (In my dream scenario, she ultimately serves Daenerys Targaryen as her newly appointed Mistress of Whispers when they both get back to Westeros, but that's another post for another day... Yeah, I'm a nerd so I've given these things an embarrassing amount of thought).

It is for all these reasons that I hereby decree that I am adopting Ayra Stark as my imaginary daughter. Everyone congratulate me, because she's basically the best daughter a mother could hope for. (No offense to my actual daughter: You're pretty great too, sweetie, but call me when you defeat your first foe in combat.) Here's why: