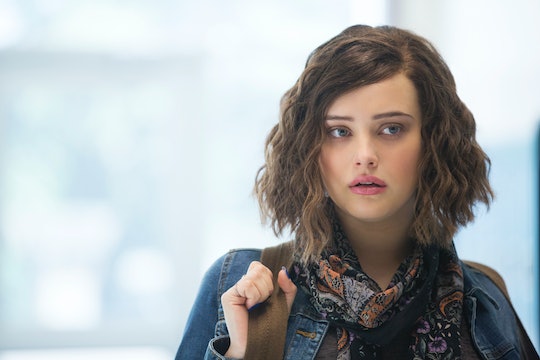 I Have Depression, & '13 Reasons Why' Gets It Wrong

I was 16 when my mom rushed me from school to the local hospital. I had swallowed a handful of antibiotics in the school bathroom, and though I didn't necessarily want to die, I had decided that the life I had wasn't worth the pain I was experiencing. I had struggled with depression since middle school, and the physical pain of it was too much. After I swallowed the pills, I felt like I was going to vomit at lunch and I felt weak, so a friend of mine called my mom on her cell. My mother was furious and embarrassed. I'll never forget the shame I felt in that moment. 20 minutes later, I was sitting across from a doctor in the emergency room. Afterwards, my mom started taking me to therapy, and I was finally diagnosed with chronic depression.

Even though I had finally gotten the help I so desperately needed, throughout my life, but especially in my adolescence, I struggled with suicidal thoughts and depression. That's why I was surprised to see that the new Netflix series 13 Reasons Why, which chronicles the events leading up to the suicide of a teenage girl, deliver such a problematic message about mental illness awareness.

(Spoilers ahead.) In 13 Reasons Why, Hannah Baker creates 13 tapes that are supposed to document the 13 reasons why she decided to end her life. From the very beginning, both the book and the show take the clear stance that, in Hannah's story, other people were to blame for her decision to kill herself. She was bullied by jocks at her school, embarrassing photos of her circulated, she was raped, and some of her friends did nothing about it, even though they noticed her extreme sadness in the days and weeks leading up to her death.

It's peculiar that Hannah is never depicted as having a mental illness, despite her showing a variety of symptoms associated with various mental illnesses.

13 Reasons Why has been lauded as a powerful tool for spreading mental health awareness, and the show seems to take its role in that respect seriously. It's worth noting that the show's producers have set up a website, which aims to help those who have experienced depression or are experiencing suicidal ideation. The website links to useful resources for those who might need help, and the show also consulted mental health professionals when developing the script.

Still, the show's approach to mental illness is immediately misleading in a few ways. Suicide is often no one's fault, and to blame suicide on any one person (or 13 people) would completely ignore the fact that the person who chose to hurt themselves made that decision for themselves. Most importantly, the National Alliance on Mental Illness (NAMI) describes suicide as a decision that's made as the result of a battle with depression, another mental illness, or a severe traumatic event (such as a rape, which would trigger a mental illness like post-traumatic stress disorder).

That's why it's peculiar that in the show and the book, Hannah is never depicted as having a mental illness, despite the fact that she shows a variety of symptoms associated with various mental illnesses. She's primarily depicted as a formerly happy, popular, attractive girl who's overcome by sadness related to rumors spread about her.

Because the series is presented through the lens of Clay, a classmate who has a crush on Hannah, it could be argued that Clay doesn't see the signs of her illness and recognize them for what they are. The other people in Hannah's life, such as her friends, parents, and guidance counselor, also don't recognize the signs of depression for what they are, which could potentially serve as a commentary for how these issues go unnoticed in our daily lives.

But I'm not the only one who has noticed the lack of mental illness discussion throughout 13 Reasons Why, or the fact that words like "depression" or "mental illness" are barely even mentioned. Serena Smith at The Tab wrote:

Suicide is caused by mental illness, not bullying; but is Hannah Baker portrayed as mentally ill? ... Not everyone who commits suicides shows signs, granted. Almost all suicides are described as ‘shocking’. But is the word ‘depression’ ever uttered once in all 13 episodes? It’s unrealistic. The mental health narrative is as pushed under the rug as ever...

Before I made my own suicide attempt, like Hannah (who is shamed and blamed for an up-skirt photo of her that a popular boy takes at a park), I was bullied relentlessly. The bullying started in middle school, but the worst of it came in high school, when a former best friend of mine managed to get naked photos I had sent to a boyfriend, printed them out, and put them on my car in the school parking lot, along with a folder that had the words "Wh*re," "B*tch," "Sl*t," and "C*nt" written on it.

My mom attempted to file harassment charges against my ex-best friend, but her father was a police officer at the local department. My mother also shamed me for my decision to take the photos in the first place. "You have got to stop taking photos of your body," she told me, then asked me why my self-esteem was "so low."

Being unwilling to make the connection between suicide and mental illness makes it that much harder to talk about in the open without shame.

But while all of these isolated incidents certainly contributed to the feeling that I was worthless and that no one would help me, they didn't make me want to take my own life. My depression, which I was diagnosed with shortly after my suicide attempt, is what made me want to take my own life. What my mom didn't realize for a long time was that there were a number of things making me feel the way I felt. Yes, the bullying was a problem, but even after the bullying stopped I had suicidal thoughts as the result of my severe depression and anxiety.

And that's where the narrative in 13 Reasons Why, both the book and the Netflix series, comes up short. Throughout both the show and the book, there's not one discussion of mental illness or what it means in the context of suicidal ideation. The show doesn't even mention the words "depression" or "mental illness." Being unwilling to make the connection between suicide and mental illness makes it that much harder to talk about in the open without shame, and thus makes it almost impossible to prevent. Hannah's narrative allows her and viewers to place the blame on a third party (like Bryce, Justin, Courtney, or Alex) rather than the true underlying cause: untreated mental illness.

According to Child Trends, teens are much more likely to consider suicide if they face a traumatic life event or are suffering from severe depression. In 2015, 18 percent of high school students reported that they'd considered taking their own lives.

And that's likely, at least in part, the result of our inability to discuss mental health without calling someone "crazy," and from the use of demonizing and condescending phrases like, "You should be on medication" or "Did you take your meds today?" Even in Netflix's 13 Reasons Why, Clay Jensen's parents make vague references to his use of medication to deal with nightmares and some kind of past mental illness. Clay seems insulted every time they bring it up, and it also doesn't help that his mother seems to think of the medication as a way to get him under control, rather than as a tool he's consented to using to help himself manage depression or anxiety.

Too often, teens are painted as just that: hormonal, whiny, melodramatic teenagers. Despite the fact that suicide was the leading cause of death among teens ages 15 to 19 in 2014, adults continue to gaslight teenagers by collectively referring to their emotions or their experiences as "whiny" or "melodramatic." Even my mother used to say to me, when my depression would cause me to sob uncontrollably or be irritable, "You don't know how good you have it," a reference to her own difficult childhood, during which she was raised by her alcoholic single father.

If we ever expect to be able to help teens like Hannah Baker, we will need to start having conversations about suicide in the context of depression and other mental illnesses.

Though it's entirely divorced from a true discussion of mental illness, the gaslighting that does happen to teenagers in real life is well represented in 13 Reasons Why. Adults too often assume that because teens don't have the words to describe rape or don't feel comfortable confronting a sexual trauma, that maybe a sexual trauma didn't happen at all. After Hannah was raped by Bryce Walker at a party, she is gaslit by her guidance counselor, who tells her the best thing she can do after she is raped is move on.

13 Reasons Why was both relatable to me because of the way Hannah is treated by her peers and her counselor, but it was also totally alienating and further stigmatizing because it painted suicidal thoughts as the result of only bullying. Bullying likely did contribute to Hannah's depression, or maybe even led her to become depressed in the first place. But to separate her suicide and thoughts of suicide generally from mental illness only endangers people like me, who, years later, still struggle with suicidal ideation at times, even though I'm no longer being bullied by mean teenage peers. If we ever expect to be able to help teens like Hannah Baker, we need to start having conversations about suicide in the context of depression and other mental illnesses.

I didn't end up in that emergency room nine years ago only as the result of bullying, and if, God forbid, I end up there again, I hope my concerns are still taken seriously, even if I don't have 13 reasons to justify why.