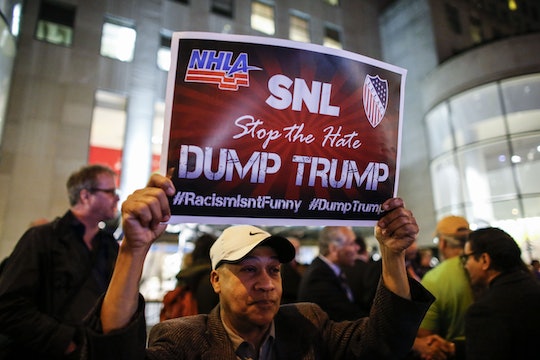 13 #SNLDumpTrump Tweets That Strike A Chord

While hundreds marched down Fifth Avenue and to the NBC Studios at Rockefeller Center to protest Donald Trump hosting SNL, others took to the Internet, using the hashtag #SNLDumpTrump on Twitter to voice their disapproval. And, like almost any other time in the history of Twitter, the Internet did not disappoint. And it's not we couldn't have seen this coming: Donald Trump is polarizing, to say the least. So, it comes at no surprise that many people were upset about Trump hosting Saturday Night Live this year. Whether it's his comments concerning immigration and the Mexican population, to his remarks about women and they way they look (because apparently that matters in the wonderful world of politics), the Republican party nominee has done more than his fair share to ensure that when the time came, people would boycott his SNL appearance.

From hilarious 140 character rants to serious and poignant concerns, twitter users the world over were quick to voice all the reasons why Donald Trump was the wrong man for the job. Here are some of the most striking tweets, calling for viewers to boycott SNL, boycott NBC, and boycott Trump in general.