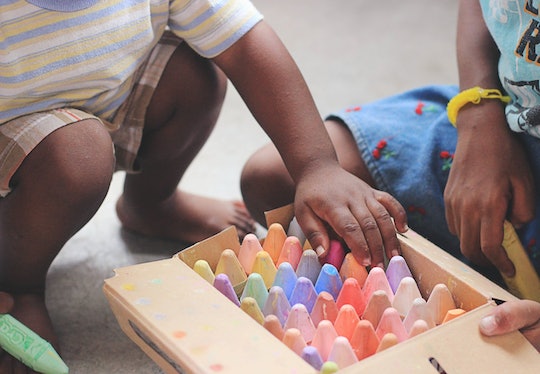 Before I became a mom, I thought playdates were going to be a much bigger deal than they have turned out to be. Perhaps it’s a bit premature for me to make that statement through, as my son is still a toddler and we have many more years of social interaction ahead of us. Still, so far, they've been anti-climactic. Well, anti-climactic and odd. Turns out, there are some weird things babies do when they can finally play with other (usually older) kids, and while those things are also super cute and provide doting parents with a plethora of photo ops, the awkwardness isn't lost on us (or at least me).

I remember how excited I was when I scheduled my first play date with my baby. Up until that moment, myself and my partner were the ones who provided our kid with human interactions, so I was excited for my baby to start learning what it meant to "play with others." Turns out, while it was absolutely adorable, that moment was also filled with some awkward blank stares. I mean, kids don't see the developmental value in playing with babies, and babies just have no idea what they're doing, aside from all the pooping. The entire social interaction was hilarious and while getting my kid to a play date can be exhausting, that first interaction made any future playdates more than welcomed (sometimes, I mean, it honestly depends on the day and if I've slept and if the stars align and, well, you get the idea).

We cheer our kids on and ask them to "play nice" and encourage social interaction, all the while acutely aware of just how weird it can be to ask two children to become the best of buds. Parenthood is weird, you guys, and when your baby is old enough to play with other kids, you'll be acutely aware of that undeniable fact in the following ways: