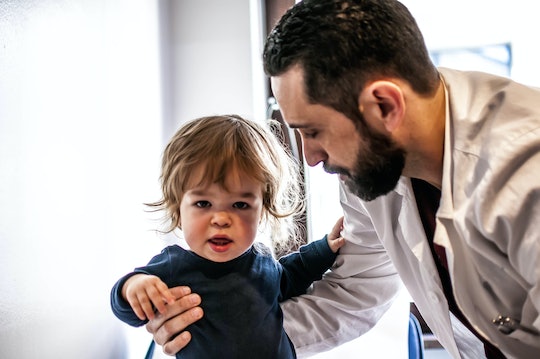 Toddlers put things in their mouths. It's an inevitability. It's weird and gross, but it's somewhat unavoidable. After all, it's how orally-fixated little humans explore their world. It's horrifying enough when your 3-year-old comes in from playing in the backyard with a mouth full of bunny poop, but I'm going to go ahead and say it's worse to have them swallow a foreign object. Often, we don't know they've done it until it comes out the other end. I figure there's no one more well-versed in weird things found in toddler poop than doctors, so I polled a group of physician moms and it was, um... enlightening.

We laugh because, fortunately, most kids who swallow foreign bodies end up just fine. You might even consider it a right of passage. According to Parents, 80 to 90 percent of things that kids swallow go right through their digestive system without a problem. Dr. Sears advises that such items are generally eliminated within three to five days of ingestion. And that, my friends, is how we get stories about 3-year-old toddlers walking the jingle bells tune after swallowing a Christmas ornament.

Some objects, however, are more sinister. According to Child and Youth Health, button batteries, coins, and sharp or pointed objects constitute an emergency. Other items only cause problems if they get stuck. You definitely don't want to try and stick your finger down their throat, as you could push the object farther down. So what should you watch for? American Family Physician warns parents to be on the lookout for symptoms such as vomiting, gagging, drooling, abdominal pain, coughing, and wheezing. Any of those warrant a call to the doctor.

So, what happens at the doctor's office or hospital? According to Healthline, the doctor may do an X-ray or bronchoscopy to get a better look. If they can see the object, they may use forceps to remove it. A gastroenterologist can remove food items with a fiber optic scope. In severe cases, surgery is needed, but in all likelihood, the doctor will take a look and send you home with instructions to observe your child carefully and monitor their stools until the object in question makes its return to the big screen. And then, obviously, you take a picture and post it on social media. Duh.

I guess I'm lucky. The worst thing I've found in my kid's poop is undigested food. Still, it was pretty bad. Following her afternoon nap, I peeled her diaper off only to have a small, round object roll right out onto the rug. Undaunted, I went to investigate. What if it was part of a toy? Or a rock? I needed to know. So I squished it... and it popped under my finger. That's right, my daughter had passed a pea. I still can't eat macaroni salad, but I'm sure I'd be much more traumatized if my kid had swallowed any of the following items actual doctors have recovered from toddler poop. Yikes.

More Like This
A Parent’s Guide To Stomach Pain In Kids
Do Parents Really Need To Worry About Their Gas Stoves? Pediatricians Explain
Viral Hives In Children: What Doctors Want You To Know
The Best Travel Tips For Solo Parenting
What Parents Are Talking About — Delivered Straight To Your Inbox