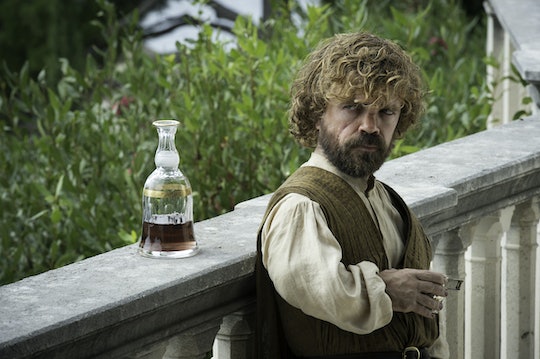 If you're a fan of Game of Thrones it's impossible not to love Tyrion Lannister, who is consistently the smartest person in the room and the one wholly decent person in his family. As such, Tyrion tends to put people in their place with witty one-liners that at this point have become one of my sole joys in this dark world of Westeros, which is why I've taken the liberty of rounding up all of Tyrion Lannister's best one-liners that prove that while he may not be the king of the seven kingdoms, he's certainly the King of Sass.

In one of his more sincere moments in the first season, Tyrion explained to Jon Snow that his mind was his weapon, just like his brother Jaime had a sword. "A mind needs books like a sword needs a whetstone," he said. Well all that reading definitely gave Tyrion the ability to turn a phrase. Some of Tyrion's best lines come from when he's fighting with Cersei or chastising his vile boy-king nephew Joffrey. But Tyrion is also clever when explaining things to his companions, or perhaps just lamenting his lot in life. So in no particular order, I present to you some of my favorite lines from the show, which will help remind you why we all love this character so much.

1. "It’s not easy being drunk all the time. Everyone would do it if it were easy."

Aside from his sharp tongue, Tyrion is known for his fondness for wine and drinking. Hey, if he can be this productive while drunk, who am I to get in the way?

2. "You love your children. It’s your one redeeming quality. That and your cheekbones."

Cersei may not be Tyrion's favorite person in the whole world, but at least he always gives her credit where credit is due.

3. “Monsters are dangerous and, just now, kings are dying like flies.”

This is right after Joffrey called him a "little monster," so leave it to Tyrion to come up with the best comeback ever.

Everyone in the world has a skill. Tyrion is lucky enough to know exactly what his jobs are.

5. "Death is so final, whereas life, ah, life is full of possibilities."

OK so this quote isn't funny, per se, but it is definitely a nice thought.

6. "Everything's better with some wine in the belly."

I see we're picking up on a theme here. But in my personal experience, I have to admit this one seems fairly accurate.

7. "I'm not particularly good at violence but I'm good at convincing others to do violence for me."

Tyrion may not be the greatest swordsman on the battlefield, however, his talent for recruitment brought Bronn onto the series and for that I'm forever grateful.

Trying to control King Joffrey, in a nutshell.

In wondering why all the gods were so vicious and unfair, Tyrion wants a different kind of god. A god he can believe in.

11. "We’ve had vicious kings, and we’ve had idiot kings…but I don’t know if we’ve ever been cursed with a vicious idiot for a king!"

Another A+ read of Joffrey, who was the worst in all ways it is possible to be the worst.

12. "Drinking and lust, no man can match me in these things."

Going back to Tyrion's preferred deity, the man really knows his strengths.

My favorite Tyrion is a mild-mannered Tyrion. Especially when he's just calmly explaining why he's not ready to be executed.

14. “I’m not questioning your honor, Lord Janos…I’m denying its existence.”

If you don't remember Lord Janos, he's the guy who was in charge of the city watch in the first two seasons. The one who killed all of Robert Baratheon's bastard babies and also all of Ned Stark's men in the throne room. Yeah, Tyrion had no time for this guy and therefore gave him the ultimate mic drop.

As you can clearly see, Tyrion knows how to deliver verbal punch like no other, and for that Game of Thrones fans will be forever grateful and bend the knee to the comeback king of Westeros!