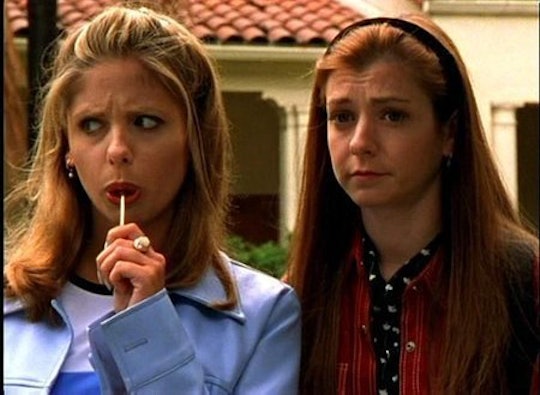 During my childhood, I'd see many actresses portray badass characters in shows and think,"I really wish I could be her." Seeing women who were tough and made things happen made everything seem possible. I always wanted to be them and I told myself that when I had a child, she would be as tough as them. Since then, I've stored baby girl names inspired by '90s movie heroines to have when that time comes.

I've always been a fan of Buffy the Vampire Slayer. Even now as a grown-ass woman, I get the urge to binge-watch the entire series at least once a year. Seeing how tough Sarah Michelle Gellar's character was, the unconditional love she had for those close to her, and her ability to save all those people (and still go to school) was so cool to me. Almost 20 years later, I can still say that her '90s heroine character made a lasting impression on me. Though I've always felt the name Buffy was kind of odd, I honestly would consider naming my baby girl that just because of the greatness the character exuded.

Whether you're just a fan of the '90s and all the greatness the young women gave it, or if you're just looking for a fearless name to give your baby girl, these 15 characters will give you a little inspiration.