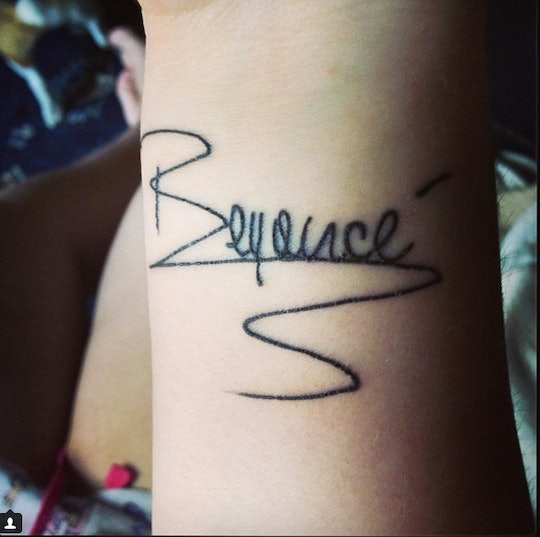 If you haven’t noticed, I’m the resident Beyoncé-crazed babe over here at Romper. I’ve seen her in concert twice, and I’m going to see her again this summer for the 'Formation' World Tour. I own her DVDs, I sing her lyrics in the shower, I know an inordinate amount of lesser known facts about her. Some might call me a super fan (or weirdly obsessed). However, actual superfans would probably scoff at my knowledge, and dedication. After all, I don't have any Beyoncé-inspired tattoos yet.

Beyoncé has a tattoo of her own, she has her own line of flash tattoos, and she and Jay have even been known to inspire other celebrity tattoos. And if she's inspiring celebrity tattoos, you can be damn sure that she's inspiring plenty of other tattoos across the world. That's Queen Bey for you, the face that launched a thousand tattoos. Well, maybe not a thousand, but at the very least, I've rounded up 15 Bey inspired tattoos for you to consider while you're waiting on her new album to drop. Whether you're a fan of her lyrics, or you prefer a more obvious option like the Queen's face inked on your bod forever, you've got options (and inspiration).