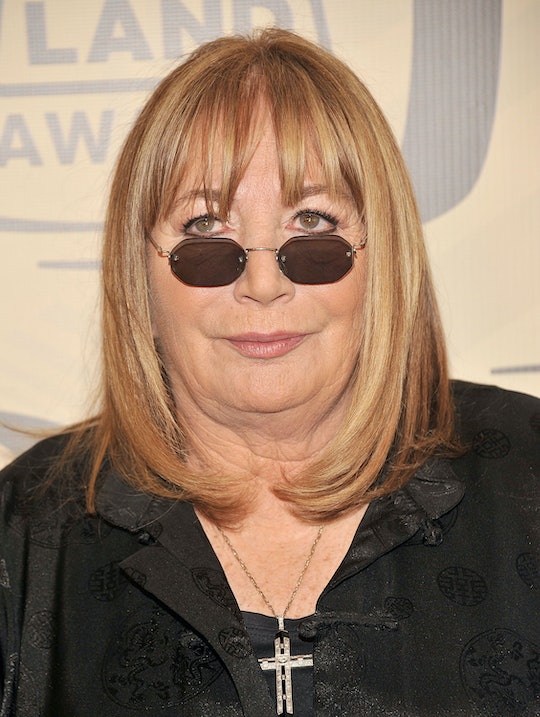 It's a sad day in Hollywood, as one of the most iconic actresses and household names of the late 70s and early 80s has passed away. TMZ reported that as of last night, Monday, Dec. 17, Penny Marshall passed away at age 75. She was perhaps best known for her role as Laverne in Laverne & Shirley, prior to embarking on her career as a director of many notable films. And these 15 celeb responses to Penny Marshall's death prove how iconic she really was.

Alongside her iconic television roles, Marshall was also noted for her work in directing, according to The Los Angeles Times. She's credited for some popular films in the last century, including A League of Their Own, Renaissance Man, The Preacher's Wife and Riding In Cars With Boys.

It's clear that Marshall leaves behind her a real legacy, and reactions from celebs on social media prove that even more.

Star Trek actor George Takei commented on how significant he believed Marshall's career as a director was on Twitter, sharing:

Penny Marshall brought us great laughter and truly broke new ground as a director. Neither a schlemiel, nor ever a schlimazel, she shall be missed by her many fans. Rest in peace.

Fellow actor James Woods shared with fans that he is "devastated" over Marshall's passing, calling her one of his "dearest friends."

Micucci thanked Marshall for her contributions to Hollywood and acting as a whole, expressing her gratitude for "all that you made for us."

Author Shauna Wright added that Marshall was a "pioneer" not only in women's comedy but also as a director.

Film critic Maltin expressed that Marshall was ahead of her time in her roles as a comedian, actress and director, sharing:

A generation before the current crop of female directors Penny Marshall made such memorable films as ‘Big’, ‘A League of Their Own’ and ‘Awakenings’. Let her not be forgotten.

Fellow director DuVernay thanked Marshall for "trailblazing," and of course, for all the laughs.

Bialik shared with followers that Marshall was "comedy gold," and that she was someone she really looked up to:

I grew up wanting to be as funny as Penny Marshall, and had the pleasure of meeting her a few times. Watch some old Laverne and Shirley to see why her brother Garry insisted on casting her. Comedy gold, she was.

Matlin, a deaf actress who is herself a trailblazer, uploaded a photo alongside one of Marshall in which they are both wearing sweaters with their first initial stitched on the left side of their chest. She said:

I always loved this picture because it was my way of emulating the great Penny Marshall. I’m sad to read she has passed. Director, producer and actress who had the humor, wit and fortitude to stand equally with the boys in Hollywood. Goodbye Penny, we will miss you. RIP.

Rapper Bow Wow recalled memories of sitting court side with Marshall, sharing a love of basketball. He added that she was a "great woman" with a "great soul."

Comedian Kathy Griffin shared that Marshall was a "loyal friend," to her likewise citing that she was a "pioneer" in the industry, and someone who truly supported the plight of women in Hollywood.

Paul, who is the editor of the New York Times book review, noted something that may have been eclipsed by Marshall's incredible film career: her writing one. Paul noted that she "knew how to title a memoir," including a photo of her book called "My Mother Was Nuts: A Memoir By Penny Marshall."

Cherry, who is also a director, cited Marshall's work in A League Of Her Own, describing a scene in which a black woman throws a ball from the stands, saying it was "so important" for him to see that as a kid. "We all knew it meant and most directors wouldn't have included it," he shared. "That's why she was one of the best."

DeVito said Marshall had a "heart of gold," but that she was also "tough as nails" and that he felt fortunate to spend time with her when he could.

Doyle, who is an author, added that she was happy that Marshall got to see a time in which the old concepts of women being unsuited for comedy or directing were long over, though she does regret that Marshall couldn't have been alive longer to see all that would happen with female directors in the future.

Ultimately, it's clear that Marshall had a profound impact on all of Hollywood, as well as those who loved her and idolized her most. Rest in peace to a true pioneer and icon.