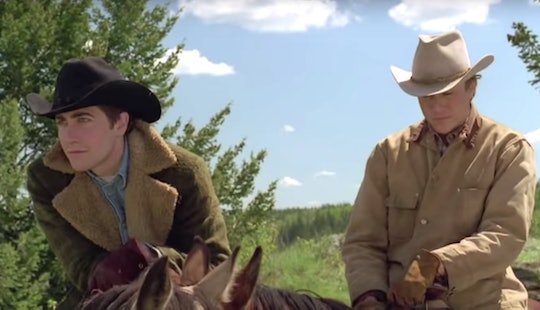 15 Movies With Same Sex Couples To Stream Tonight, Because Love Is Love

How many movies can you name off the top of your head that feature gay romances? If you aren't familiar with many, you're probably missing out. There are so many movies with same sex couples that have gotten rave reviews, if not quite as much attention as they deserve, that are well worth a watch. With Pride Month now underway, it's a perfect time to fire one up in celebration of the LGBTQ community.

There's a little bit of everything on this list — rom coms, drama, crime trillers, even supernatural and horror movies. There are blockbusters that racked up awards, indie films, and foreign films that you'll have to turn on your captions to understand. But they all spotlight gay relationships, which don't get nearly enough representation in movies. The number of gay characters in film has seesawed a bit in recent years, according to the most recent statistics from GLAAD, an advocacy and watchdog group that promotes LGBTQ acceptance. The group examined 109 major studio releases in 2017, and found that just 14 featured LGBTQ characters, the majority of which were gay men. That was a drop from 70 characters in 2016, and 47 in 2015.

These 14 movies buck that trend, so whether you're checking them out for the first time or rewatching a favorite, you'll want to hit play tonight.