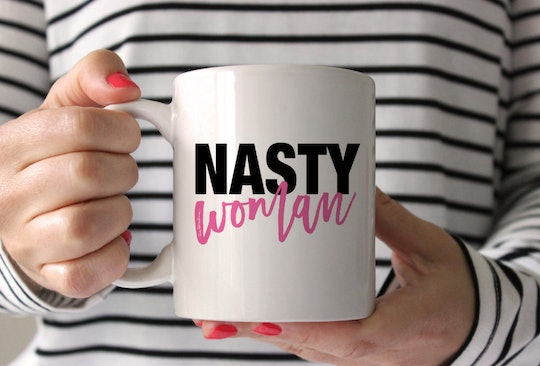 Say what you will about the internet, but it has certainly made this election season more entertaining. Now that political punditry has become more democratized, anyone can make fun of the giant circus that is the U.S. presidential election. And if you're looking for some clever ways to send off the 2016 election, then nasty woman merchandise is sure to leave you laughing. (Because at this point, you have to laugh to avoid screaming).

During the third presidential debate, Trump referred to Clinton as "a nasty woman," as you can see in this CNN clip. Though the comment was meant as a slam, the good people of the internet wasted no time in making a meme out of this quip. Since then, it's snowballed and now there is a ton of nasty woman merchandise for your amusement. In about one week, a bevy of t-shirts, jewelry, and even cross-stitch kits have cropped up for nasty women everywhere. It took no time at all for nasty women and bad hombres alike to reclaim this derisive term as a point of pride. Now you can wear your nastiness with pride as a pin or tote bag when you go vote on Tuesday. Why not make POTUS 2016 as nasty as possible?