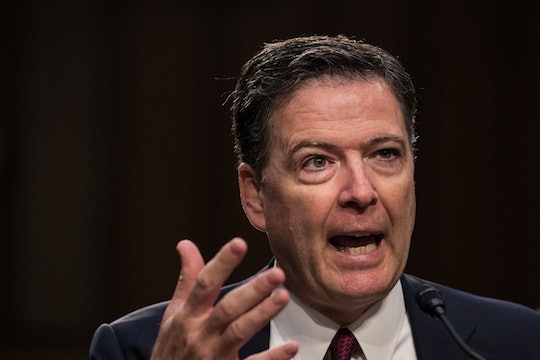 If you weren't able to watch former FBI director James Comey testify to the Senate Intelligence Committee on Thursday, there's no need to read the full transcript; here are all the quotes from Comey's Trump testimony you need to see. The testimony inspired events at bars across the country, according to Reuters. Day drinkers in D.C. were offered breakfast specials and cocktails called "Impeachmint" and "Drop the Bomb" during the testimony, which began at 10 a.m. Eastern Time, and several San Francisco bars opened as early as 6 a.m. local time in order to host viewing parties.

While that sounds like a blast, some people have to work and/or parent today, but just because you missed out on the fun doesn't mean you have to miss out on the news, too. People will be talking about this testimony for years to come, so let's catch up on the basics. The testimony technically began on Wednesday; as Comey's written opening statement was shared publicly a day ahead of his appearance. In it, Comey confirmed a number of rumors regarding interactions between himself and the president, and gave the public a glimpse at what to expect during the hearing the following day.

Let's start with the opening statement, which, since it was written in advance, was very carefully worded.

"We did not have an open counter-intelligence case on him"

Comey said that when he was tasked with briefing Trump on "salacious and unverified" material — yes, he meant the gold shower dossier — he discussed with FBI leadership whether he should assure Trump that the bureau wasn't "conducting a counter-intelligence investigation" on Trump, since the question was bound to come up. But he also devoted two full paragraphs preceding this line explaining how counter-intelligence investigations "tend to be centered on individuals" targeted as potential assets by foreign powers. All his statement really means is that on Jan. 6, the FBI was not currently exploring the possibility that Trump was being targeted. It doesn't mean that no intelligence agency ever investigated Trump, and it doesn't mean that none would in the future.

"It turned out to be just the two of us"

The second of Trump's many unprecedented private meetings with Comey sounds like a sitcom-style ambush: Trump called Comey one day around lunchtime, he wrote, and invited his family to dinner. Then he rescinded the family's invitation and said only Comey should come. "It was unclear from the conversation who else would be at the dinner," he wrote, "although I assumed there would be others." The only other people there were two Navy stewards who waited on them. This was when Trump made his repeated demands for loyalty, and told the FBI Director that "lots of people wanted [Comey's] job." Comey used the word "awkward" twice to describe the dinner.

"He did not reply"

By now, you've probably heard about Trump allegedly asked Comey about "letting Flynn go." Comey confirmed the meeting, which he claims followed an Oval Office briefing attended by several people. He wrote that Trump ended the briefing by "telling them all that he wanted to speak to me alone." He also claims that Trump repeated that request twice to Sessions and Jared Kushner when they lingered, and shooed Reince Priebus away when he interrupted. Afterwards, Comey claimed, he told Sessions that it was inappropriate for Sessions to be ordered out of the room, given that he was Comey's superior, and asked him not to let another private meeting occur. Sessions didn't reply, and boy, do I wish Comey had described the exact expression on his face.

"He said he had nothing to do with Russia"

In March, Comey wrote, Trump called Comey to complain that the "cloud" of the Russia investigation was making him look bad. "He said he had nothing to do with Russia, had not been involved with hookers in Russia." This is important, according to Bloomberg, because now special counsel Robert Mueller can investigate the infamous dossier that nobody seems to want to touch. Comey was a representative of the federal government when Trump made those statements, and if it turns out that he lied, that's a federal crime.

"It would create a duty to correct"

Remember Comey's explanation for the October surprise, when he announced that the FBI was reopening the Clinton investigation? He said he was bound to tell Congress, because he'd previously told them it was closed. Wary of making the same mistake again, Comey wrote, "I did not tell the President that the FBI and the Department of Justice had been reluctant to make public statements that we did not have an open case on President Trump for a number of reasons, most importantly because it would create a duty to correct, should that change." Also, doesn't that imply that both the FBI and DOJ were fully expecting to investigate Trump eventually?

"Those were lies, plain and simple"

Appearing before the Senate Intelligence Committee on Thursday, Comey acknowledged that he'd already submitted his opening statement, so rather than repeat it, he offered his rebuttal of the White House's claims that he'd been fired for poor performance. According to a Politico transcript, Comey testified that "the administration then chose to defame me, and more importantly the FBI, by saying that the organization was in disarray, that it was poorly led, that the workforce had lost confidence in its leader. Those were lies, plain and simple."

"I don't think that's a question I can answer"

Comey met with Mueller ahead of his testimony, and was expected to refuse to answer any questions that might compromise the special counsel's investigation, according to Politico. When North Carolina Sen. Richard Burr asked Comey if any of the allegations from the infamous dossier had been confirmed by the FBI, Comey said he couldn't answer "in an open setting, because it goes into the details of the investigation." He also declined to comment on his reaction upon reading the dossier for the first time, again citing the "open setting." A reminder: a closed-door testimony hearing immediately followed the open session on Thursday, so Burr may have gotten his answers.

When Virginia Sen. Mark Warner asked Comey why he chose to keep written records of his private conversations with Trump, Comey said it was a combination of "the circumstances, the subject matter, and the person I was interacting with." Going into detail, he explained, "I was honestly concerned he might lie about the nature of our meeting."

Asked by Warner if everyone on Comey's team agreed with his decision to tell Trump that there was no open investigation on him, Comey said one person felt that "inevitably his behavior, his conduct will fall within the scope of that work." Comey agreed, however, he decided that his statement to Trump "was technically true" at the time.

"The Russians interfered in our election"

I can't believe we're still debating this, but according to Comey, "It's not a close call. That happened. That's about as unfake as you can possibly get. It is very, very serious."

"He's looking to get something"

When Warner asked if Comey felt that Trump was "holding your job ... over your head" during that awkward dinner, Comey said, given the fact that Trump had already asked him to stay on twice before that encounter, he got the impression that perhaps someone had said to Trump, "you've already asked Comey to stay, and you didn't get anything for it." He then put it more bluntly: "I could be wrong, but my common sense told me what's going on here is, he's looking to get something in exchange for granting my request to stay in the job."

When asked if Trump directed or ordered Comey to drop the Flynn investigation, Comey twice answered with that phrase. What Trump actually said, Comey testified, was "I hope" the investigation would be dropped, but given the context, "I took it as a direction." The White House has not responded to requests for comment regarding the allegation that Trump said this or allegations that this would constitute obstruction of justice.

"I was fired because of the Russia investigation"

Yup, he said it. California Sen. Dianne Feinstein's first question out of the gate was "Why do you believe you were fired?" Comey said that he watched Trump's interview with Holt, and "I take him at his word."

"Lordy, I hope there are tapes."

When asked why he didn't put an end to the Flynn conversation and tell Trump "this is wrong. I cannot discuss this with you," he said that he was stunned, but that he meant his reply "'I agree he is a good guy,' as a way of saying, I'm not agreeing with what you asked me to do."

That's right, it was Comey who leaked the memo about the Flynn conversation. "My judgment was, I need to get that out into the public square." And it's a good thing he did, otherwise we might never have seen this testimony.

Thank you, Mr. Comey, for the weeks of entertainment you've provided the American people. Oh, and your integrity and all that. But mostly for the entertainment.