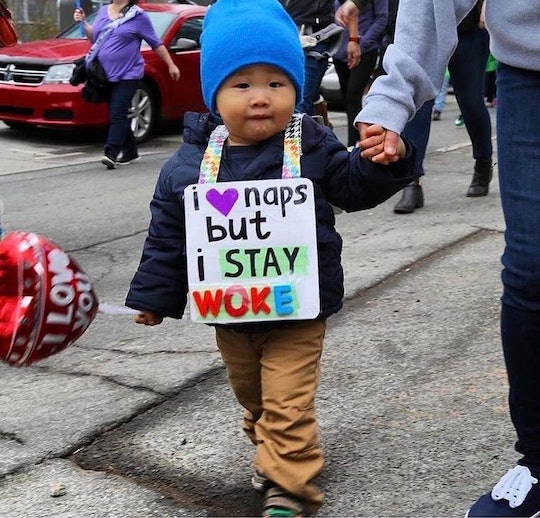 The Women's March in 2017 was one of the most therapeutic things I participated in the entire year. I brought my daughter, and we cheered and yelled and smiled at how clever the signs people carried were, including those carried by little ones. I vowed that this year for the Women's March, I would come better prepared with a sign for myself and one for my daughter (and I would bring my husband and son!). But choosing just the right words to display can be overwhelming, which is why I've done a little research and put together this list of signs for kids to carry at the women's march, so we can all be march-ready this time, too.

While the theme of this year's marches will be less about general frustration with the results of the presidential election, and more focused on voting, it doesn't make these messages any less relevant. This year, the Women's March is a Power to the Polls kickoff event, designed to encourage voter registration and support women candidates. While last year, the main women's march took place in Washington, D.C., this year the headline event will be in Las Vegas, Nevada, on January 21st. But of course there will be sister marches across the country, and you can find your local anniversary march to participate in here.

Once you choose a march to attend, grab some poster board and markers and whip out a few of these awesome signs.

More Like This
The Best Halloween Family Pajamas To Match Your Boos
Tips For Apple Picking With Kids
25 Mother And Daughter Halloween Costume Ideas That Are Cute And Spooky
Are You Leaking Amniotic Fluid Or Is It Normal Discharge? Experts Explain